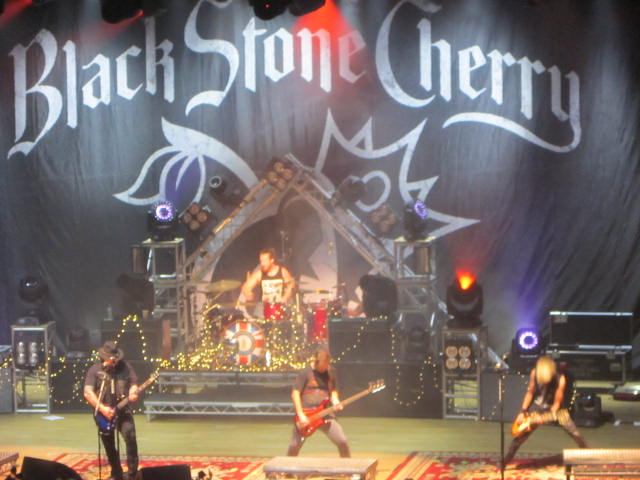 Formed in Edmonton, Kentucky in 2001, Black Stone Cherry are a Southern rock / grunge four piece comprising of Chris Robertson (Lead vocal and lead guitar), Ben Wells (Rhythm guitar and backing vocals), Jon Lawhon (Bass and backing vocals) and John Fred Young (drums and backing vocals). Although the band are making noises in their homeland, it’s Europe where the guys have their major following. I had been meaning to get around to seeing them for some time but one thing and another just got in the way. I was more determined having seen drummer John Fred’s Dad Richard’s wonderful band The Kentucky Headhunters, just up the road in Bilston in July. The guys having toured arenas with The Carnival of Madness tour in February were back to play smaller more intimate places this time around, if you can say the 3000 capacity Civic Hall is intimate.

Tonight’s performance, billed as Experience Kentucky, was split into two sections. The first was the boys performing an acoustic set of numbers and then rounding the evening off with a full on Electric performance.

Seated in a row the fellas kick off with “In Our Dreams” from their last release “Kentucky”, then “Hell & High Water” and “Like I Roll” before we are gifted the wonderful heartfelt “Rambler” a sort of lament about being away from home. “Things My Father Said” is quite poignant, as its two years since Chris’s Grandfather has passed away. “Stay” and “Big City Lights” follow before the final song “All I’m Dreamin`Of” is played out with Robertson rising and unwinding the microphone to share the lyrics “Good times, good friends and somebody to love.” The songs were well selected for their ability to be stripped back and impact on an appreciative audience. We get lighters and phones held high and the congregation joining in with the singing. The band confirm they will be back soon with the full on show and leave to ecstatic applause.

A blistering version of “Devil’s Queen” opens out the second half of the show and we get “Soul Machine” before a pretty good version of George Thorogood`s “Bad to The Bone.” The anthemic “Soulcreek” is up next before “Please Come In” a real Soundgarden grungy type song with a great chorus hook.

Some more excellent guitar riffs follow with the killer tune “Darkest Secret” before the Alice in Chainsy “Killing Floor.” The catchy lyrical throwaway “White Trash Millionaire” gets a blast before we are offered what I can only describe as a rock rap tune with “Cheaper to Drink Alone.”

The ever popular “Me and Mary Jane” is blasted out before the understated guitar ability of Chris Robertson is highlighted on a cover of Willie Dixon’s “Built For Comfort.” This sleazy version really highlights this guys irresistible Southern Charm. We all get to sing along with the superb “In My Blood” a song about fulfilling our dreams and Robertson shares that his dreams have come true with forming the band and now having his own signature guitar. No nonsense rock out “Blind Man” gets us back on track before a drum solo then another mid temp rock out with “Shakin` My Cage.” The set is closed out with the anthem like “Blame It on The Boom Boom” and “Lonely Train” with the catchy chorus of “Can’t Judge a Book” The show concludes with a shortened version of the late Lemmy`s “Ace of Spades” as the guys gather at the front of the stage to take their well deserved bows.

This was a scorching show from these Good Ole Boys and proved what wonderful musicians they are and what a gifted vocalist they have. They proved that they are more than just your run of the mill heavy rock band with songs that veer more to grunge and they excel when they perform acoustic masterpieces. The guys also seem to look like they are really enjoying themselves and have a genuine love of their audience and what they have achieved so far. They say that you always remember your first time and I certainly won’t forget losing my cherry here.

Previous article
On It Like Sonic
Next article
VOLBEAT @GENTING ARENA, Birmingham 27/11/16