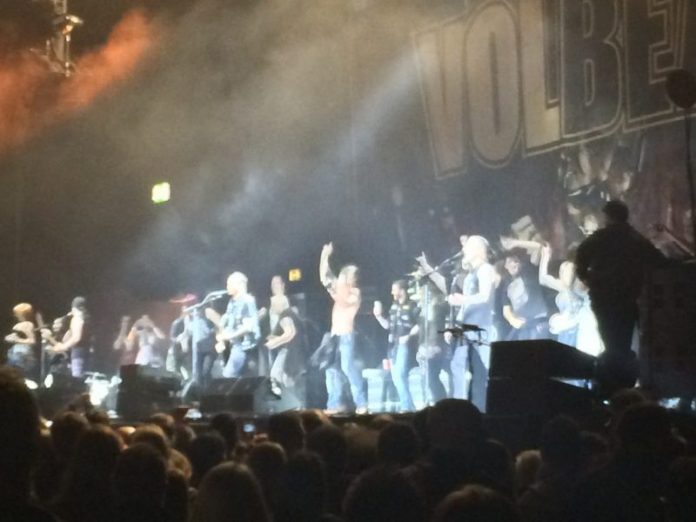 Quite why it took the UK so long to cotton on to the inescapable fact that Volbeat rule, is anybody’s guess, but no matter. In recent years there’s definitely been an upturn in interest in Denmark’s leather clad kings.

Very possibly the first band in the history of rock n roll to mix rockabilly with metal, and country with punk all in one go, even though they are only afforded 45 minutes here, as main support to US dullards Alter Bridge, Volbeat are not in the mood waste a second.

Delivering a typically charged up showing  Michael Poulsen and his merry men bring it on ten songs from various points of their career – although half of it comes from the album of the year contender “Seal The Deal And Let’s Boogie” (its title track is the song of the night. )

Poulsen is an expert showman, cheerily getting 8,000 Brummies singing Johnny Cash before “Sad Man’s Tongue” and singing in Danish during “For Evigt” as well as administering circle pits whenever he chooses.

The evening’s most surprising cameo sees Mark “Barney” Greenway make a home town appearance during “Evelyn” dad dancing his way through, before alienating at least half the audience by yelling “Up The Villa!” before he leaves.

While he disappears, the audience gets up close and personal, with a punk rock style stage invasion during the ending tune, “Still Counting” and for possibly the last time this evening we are at a rock show, not some slick event.

If there’s any justice, then Volbeat would be back in venues like this themselves, but then, as the rest of the show proves, there’s no accounting for taste.