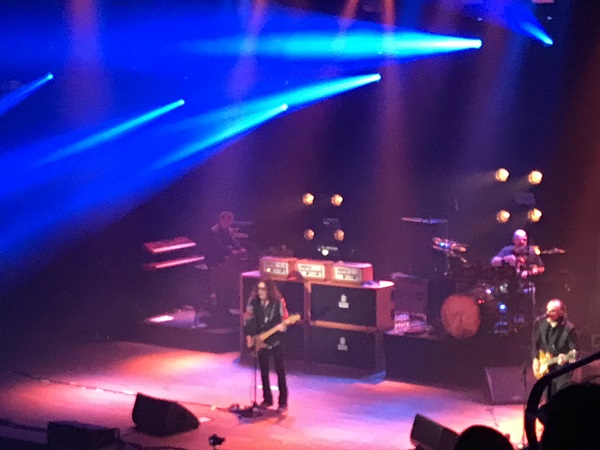 The boys are back in town

29th December 2010. MV is on the right balcony of the Wolverhampton Civic Hall to watch history made, as Glenn Hughes, Joe Bonamassa, Derek Sherinian and Jason Bonham play their first show as Black Country Communion in the UK. They had just released the album of the year.

2nd January 2018. MV is on the right balcony of the Wolverhampton Civic Hall to watch history made as the same four men play their first show in six years, give or take. They have just released the album of the year.

The history of the band – three wonderful albums in the space of two years before 2012, a reportedly acrimonious split after, ironically, a gig that was due to be played here got pulled – is for another time. All that matters right here, right now is that they are back, the “BCC IV” album is incredible and, on the evidence of this, it’s like they’ve never been away.

Things open in suitably bombastic style. “Sway”, from the new record, doesn’t so much announce itself, as kick down the door and demand your attention, but this is not just about the present, with all their albums represented.

Mostly due to their schedules, the band never got the chance to play live all that much back in the day, and appear to be relishing the chance to air these songs. “One Last Soul” is a genuinely superb single, while “Save Me” has echoes of Led Zep. “Wanderlust” – another of “….IV’s” songs is perhaps the first moment where the ring rust is truly shaken off and knockout blows are landed,  after the organ of Sherinian has cut loose, Hughes and Bonamassa – two giants in their own right – almost duel like big beasts looking for supremacy in the herd. It says much for the skill of both that it is a very honourable draw.

It is clear, however, that this is a band with almost two frontmen. As befits the man who is every inch the king of modern blues, Bonamassa is frequently stunning on guitar, while his vocals are mighty on “Song Of Yesterday” too.

But, no one upstages the Cannock born Hughes – not in his own back yard. No one sings like him either. He roars like a force of nature, particularly on “The Outsider” while is brilliant bass work is to the fore on “The Crow”.

Special guest Gerry O’Connor from The Dubliners joins them for perhaps the standout moment of their recent vintage, “The Last Song For My Resting Place”. It lives up to that here, too, and ends with Jason Bonham pounding the drums for a short solo. It is noticeable that for the most part, although you are unlikely to find four more gifted musicians, there are hardly any lengthy jams in the main set.

Things hurtle throughout, and “Man On A Mission” and their almost eponymous anthem “Black Country” pass by in a blur. The encore is a little more sprawling and includes a cover, although not before they’ve played a couple of their own songs including a brooding “Collide”.

When it comes, the cover is Deep Purple, and if you might have guessed that, the blues of “Mistreated” might surprise. It was though, as Hughes explains, the first song he and Bonamassa ever played together – and they embrace warmly at its end.

There is – and indeed always has been – some special kind of magic when these four play. They are one of the finest rock bands on the planet and that rare thing, four genuine stars blending to make an even greater whole. To paraphrase one of their songs. They are the messengers. This is their prophecy. And tonight, they were back where they belong. In the Black Country.