Share
Facebook
Twitter
WhatsApp
Linkedin
Email
Print
Tumblr
Welsh boys land Normandie slot
Self-described Valleycore band (Post-Hardcore from the Valleys) Breathe In The Silence (BITS) are gearing up for what is already shaping up to be a big year. With the release of their much anticipated second EP looming they have just announced a fantastic tour with the incredible Normandie. 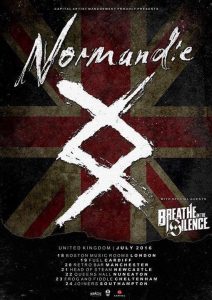 The BITS boys are unfamiliar with success. After releasing their debut EP the band rode off it getting them airplay on the likes of BBC Radio 1, Kerrang Radio and Cardiff Radio. They have also been on the cover CD of Metal Hammer with their previous single ‘Feathers’.
The band also won the Red Bull Live At Download Competition in 2014 which saw them playing the Red Bull stage at Download Festival.
Now with a the likes of this tour (and more to come) and the addition of new drummer Thom Pike (ex Falling With Style) almost everything is in place for the guys to propel themselves to new heights.