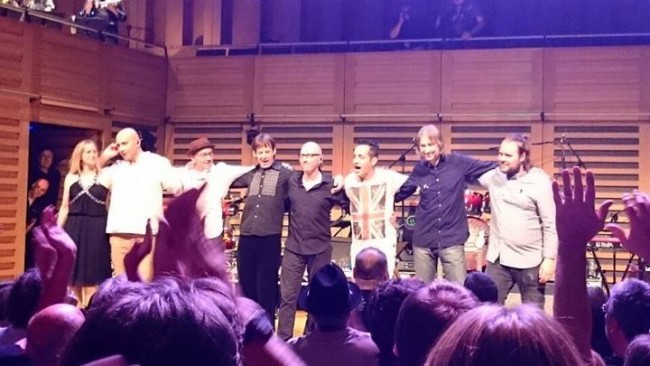 Close the book, stop taking bets and start engraving the trophy because the award for ‘Gig Of The Year 2015’ was nailed on 15/08/2015…..step forward and collect the award Big Big Train!!!
We arrived at the incredible surroundings of the Kings Place in Kings Cross, London for the most eagerly awaited set of shows the Prog world has seen in a very long time…..BBT as they shall be known for the rest of this review announced they would be playing a small collection of concerts a few months ago and the fans just went into overdrive…..the tickets were snapped up in no time at all…..and the excitement built from then on.
This was the second of three gigs and by the time the band took to the stage in without doubt one of the most amazing settings for a concert the crowd were at fever pitch…..there had been all kind of suggestions as to what would be the opening song…..the wait was over….the show opener was ‘Make Some Noise’ and after the end of the track the packed crowd certainly did!!!
During the first half of the show we were treated to ‘The First Rebreather’, the epic ‘Underfall Yard’, the masterpiece that is ‘Uncle Jack’ (just how do they cram a fifteen minute masterclass into four minutes…..always astounded me) and the beautiful ‘Victorian Brickwork’ all delivered by an incredible collection of multi talented musicians at the very top of their game.
The second half of the show opened with ‘Kingmaker’ before we were treated to the best song of 2015 in ‘Wassail’…..frontman David Longdon donned a mask from the Wassail EP sleeve during the song which just added to his performance that grew throughout the show….we were watching a modern day Gabriel & Anderson…..high praise indeed but this guy deserves all the plaudits for his wonderful performance throughout….and what a live voice he has too!!!!
The rest of the main set was made up by ‘Summoned By Bells’, a Nick D’Virgillio drum solo that led us seamlessly into ‘Judas Unrepentant’, ‘Curator Of Butterflies’ and the epic ‘East Coast Racer’…..had we really been inside this fantastic venue for two & a half hours already…..it certainly didn’t seem like it…..but as they say…time flies when you’re having fun, and the packed to the rafters audience were certainly having a whale of a time.
The band returned for the encore ‘Hedgerow’ which turned into a mass singalong….and then that was it it….the months of waiting was all over, we had finally seen BBT live in concert, the DVD and the new album ‘Folkore’ is next on the agenda….and then surely more live shows, the band were genuinely staggered by the reaction from the fans in the build up to these shows and even more so during the gig itself, and from a fans point of view we had just witnessed something very, very special.
An incredible evening that raised smiles as well as the roof…..Big Big Thanks go out to David Longdon, Gregory Spawton, David Gregory, Andy Poole, Danny Manners, Nick D’Virgillio, Rachel Hall, Rikard Sjoblom and the Brass Collective for making it a truly wonderful occasion…..as I mentioned at the top of the piece…..its hands down Gig Of The Year…..and that’s up against some really strong contenders I tell you!!!!
Previous article
Nervosa Want You In Their Pit
Next article
The Metal Mixtape