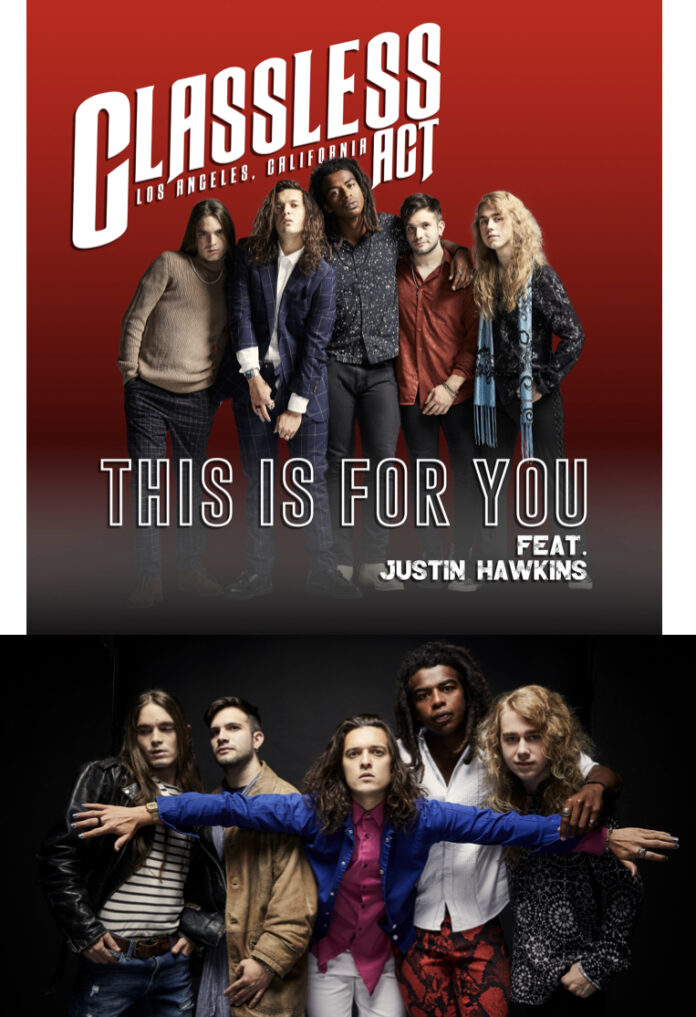 Today, next-generation rock band Classless Act just dropped a new track with The Darkness lead guitarist and singer Justin Hawkins, titled “This Is For You” via Better Noise Music. The band is also premiering an official music video for the new song. Released in time for spring and summer playlists, the band’s latest upbeat, yet heartwrenching track features a killer guitar solo from Hawkins. With lyrics like “I’ve been a fool for you right from the start, I’d even give you this song if it would please you, And if it ain’t enough, here’s my bleeding heart,” the single is both therapeutic and anthemic. Quickly rising to stardom, the Los Angeles-based group has received co-signs from iconic and legendary acts like Mötley Crüe, Def Leppard, and Posion, as they are opening on all three bands’ summer stadium tour later this year. But first, they’ll complete their North American tour with Dorothy this spring, which kicked off earlier this week in San Diego. The new single also continues the momentum set by 2021’s “Give It To Me” which saw the band gain attention from the likes of SPIN Magazine, Loudwire, and more. “This Is For You (featuring Justin Hawkins)” is now available to stream and download across platforms HERE.

Classless Act’s lead singer Derek Day expressed his excitement over the band’s latest single, saying, “It’s a dream come true for Classless Act to be a part of the Better Noise family. And the boys and I have been working really hard to give you something to shake your ass to. Now, summer’s here and the time is right for a couple of guitars, some bass and drums and a whole buncha me. Let’s get to it!!”

Collaborator Justin Hawkins shared his thoughts about hopping on the track, “One Tuesday night in February I gazed up onto the Swiss night sky. There, to my surprise I witnessed the beaming of The Hawk signal onto a passing cloud. After months of inactivity, I was called into action. My mission? To provide a face melting guitar solo to Classless Act’s ‘This is For You.’ I grasped my Gibson 335, headed into the hawk cave and within 24 hours the solo was born.”

The official music video for “This Is For You (featuring Justin Hawkins),” also released today,  part two in a four-part series that loosely follows the band as they set the soundtrack for the misadventures of Farley; an unlucky soul who just happens to be in the wrong place at the wrong time. Directed by John Orphan, the visual is available to watch HERE.

As for other support from established artists, Mötley Crüe’s Tommy Lee was an early follower of the band and is excited to have them join him and his bandmates on the road this summer, saying, the following in a statement last month: “I remember when we went out with Ozzy in 1984 and how it was an insane game changer!! We literally blew up after having that opportunity to play live in front of 20 thousand people every f***ing night! Since then, we’ve always felt it was importance of helping new bands; whether it was Guns N Roses, Skid Row or so many others.  This summer we’re gonna help out Classless Act. They’re gonna sh*t their pants.”

The new track will appear on the band’s debut album set for release later this year. For more information on the band’s touring, and to purchase tickets, visit https://classlessact.com/#tour. Full list of upcoming tour dates are below.

September 2 – Vancouver, BC – BC Place