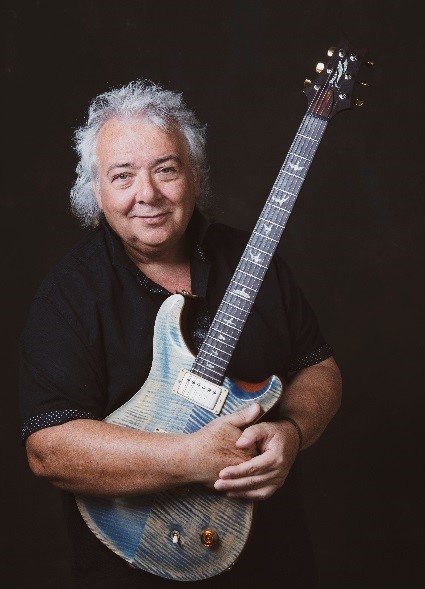 Bernie Marsden has an enviable reputation in many ways: a globally respected guitar player, a songwriter of great note (he co-wrote ‘Here I Go Again’ during his time with Whitesnake), a published author, a mentor to many, a natural raconteur on stage, lucky enough to have played with Ringo Starr but, despite all this, he is known worldwide as the ‘nicest bloke’ in the rock and roll world.

More than forty years as a professional musician has enabled Bernie to put together one of the most eclectic and iconic guitar collections in the world, and ‘Tales of Tone and Volume’ displays this in majestic fashion. The book is abundant with anecdotes of his career, each connected with one or more of his guitars. The state of the art photography shot by Melvin May enable people to see his guitars as they have never been seen before, making every page an exciting turn. See the guitars up close and personal that have been used (and abused!) in the studio, on the road, on television and to write some of the greatest rock songs of all time.

All the guitars featured in the book are his personal choices. The most famous one is undoubtedly his iconic Gibson Les Paul Standard from 1959 known as “The Beast” – a nickname given by the late Cozy Powell after hearing it roar one day in the studio with Bernie. The photos of The Beast are truly terrific – people will have never seen photos of an original Les Paul like those in the book. Another guitar featured is a cherished 1920 Martin Coletti acoustic. This guitar has been signed by some of the most famous guitar players on the planet since blues man David “Honeyboy” Edwards signed it first in 1995: Johnny Winter, Gary Moore, Peter Green, Joe Bonamassa, Steve Lukather, Joe Satriani, Tony Hicks, Glen Campbell, John Mayall, Mick Taylor, and many, many more. The guitar is a work of art in its own right – yet it’s just one of many in the book.

There are fantastic endorsements for the book from fellow guitarists like Steve Lukather, Scott Gorham, Steve Vai, Steve Morse, Martin Barre, Mick Box, Warren Haynes, Phil Campbell, as well as from a host of people beyond guitars like Ian Anderson, Mark King and Pat Cash.

Bernie Marsden will launch ‘Tales of Tone and Volume’ at Selfridges on Oxford Street, London on Tuesday December 4th at 7pm. Bernie has recently partnered with Selfridges and allowed 20 of his guitars to be featured in the Selfridges windows on Oxford and Duke Street as part of their Christmas rock and roll campaign ‘Santa on Tour’.

The book is available in three editions:
The standard edition, The Guitarist’s Edition, The Beast edition (L-R).

The Standard Edition is a luxury A4 hardback Portrait book (smaller than the other two editions), with a printed, laminated cover and foil embossed logo. It also ships with a CD of music and comes with a card slipcase.

The Guitarist Edition is a huge A3 Portrait book, quaterbound in dark red recycled leather, that comes in a luxurious leather case, with a foil embossed logo. It also ships with exclusive frameable prints of four different guitars featured in the book, a poster, a CD of music, and a folder containing a real piece of vintage 1950’s Lifton guitar case.  Limited to 300 Signed (by Bernie) and numbered copies worldwide.

The Beast Edition is a huge A3 Portrait book, quaterbound in brown recycled leather, that comes in a luxurious wooden case, engraved with The Beast Logo. It also ships with exclusive limited edition framable prints of The Beast itself, a poster, a CD of music, and a folder containing a real piece of vintage 1950’s Lifton guitar case.  Limited to 100 Signed (by Bernie) and numbered copies worldwide.