Tensheds, we find out later in the evening is known to Beans On Toast’s mum as Matt Magic Fingers. Not to cast aspersions on Mrs. Toast, this is because he is so good on the piano. He is, and he proves this both in his own set and in the headliners band. He is also a compelling artist too. “Youngbloods” with its “always the first to die” hook is strikingly good, “Gold Tooth” is more rock n roll (in fact on my notes for the evening I had simply written “Spirit In The Sky” riff) but no less deep. He does a song about a bridge popular with suicides that “doesn’t have a name, it is too depressing”, while “Doghouse” rather underlines his talents. First of all its from a record called “The Dandy Punk Prince” – which is apt really – then it is something akin to Nick Cave, but with a rock n roll streak and a black humour. That’s Tensheds, right there. 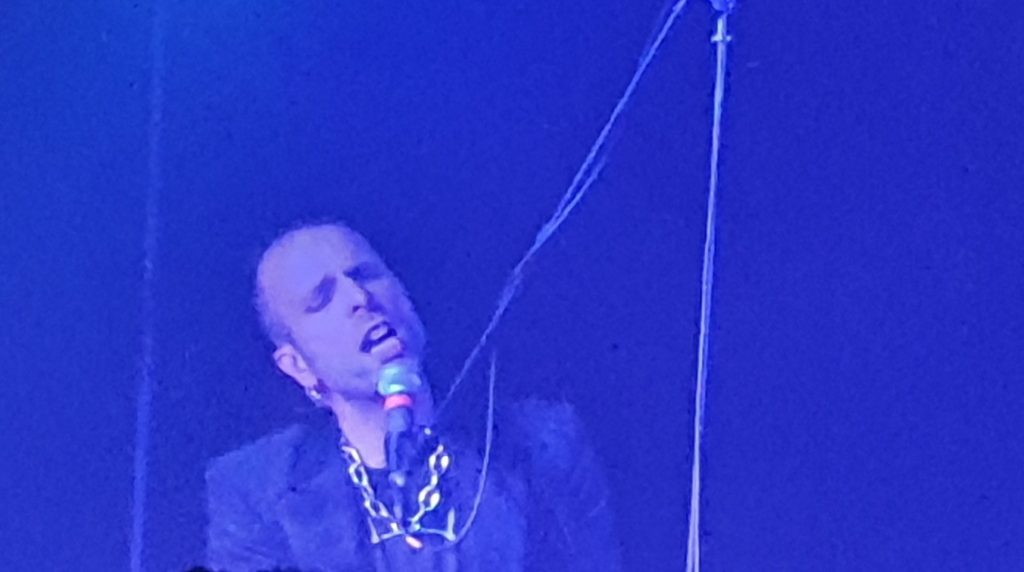 “People say to me,” smiles Beans On Toast, after he’s played “M.D.M Amazing” about a third of the way through his set, “that you must get bored of playing that song”. He pauses. “Bored!? Fuck me, I will show you some of the jobs I had before I did this…..”

How can you not respond to that? This is a singer/songwriter who does it because he loves it, and that, honestly, shines through all over this set.

BoT has a neat line in self-deprecation too. On 1st December 2019 he released a new record (nothing new there, as regular as clockwork they turn up on his birthday every year, like his present to us) but “The Inevitable Train Wreck” was not only one of THE records of the last 12 months but it was a proper rock n roll affair.

As such – and he plays a shedload of it here – he’s got a beefed up band with him tonight Kitty and Lewis Durham and the New York Brass Band, as well as Tensheds (who all recorded the album with him) and it sounds fabulous. Raucous too, kind of punk, a little like the wonderful Skinny Lister gig that was in this room just before Christmas for the vibe it gave off.

He starts on his own, though. “Money for War”, almost like a manifesto, before we are straight into the new album. “World Gone Crazy” is one of its best – as well as containing the title of the record – and coupled here with “England, I Love You” (“I wanted to write a Brexit song my mum wouldn’t hate….”) “Extinction No.6”, and “Logic Bomb” (“the funkiest Beans song”) pass by in a blur, and there is a lot of music played tonight.

There are some old ones too. “Watching The World Go By” a ray of sunshine here, before he plays a solo section, with “The War On War” and the new one “Take Your Shit Home With You”, real highlights.

He disappears into the crowd for “Robin Hood”,  returning to play “The Ignorant Englishman” which smashes the “Little Englander’s” arguments one by one ,my personal favourite from the “….Wreck” stuff, “Rich Vs Poor” before the band return for “Thank You To Robots”, and “Things”.

He gets bonus points for not leaving the stage when it comes to encore time, and instead saying “cheer if you want one”. Birmingham cheers.

They get one too. A long one. Which takes in (amongst others) “Stinging Nettles” – a song he wrote to get children to reconnect with nature – and a new song about Helloween, both of which, it seems to me, prove that Beans might well be the finest wordsmith there is on these shores right now. He can, without question, make a fabulous song out of everything.

“The Chicken Song” – his take on battery farming – and “The Great American Novel” played as a request, are further underlining of that, while “On And On” – with the full band – offers hope, and a communal expression of that too.

He goes right back to the start of his career. That 50 song debut. For “Price Of Rice”, and the upsetting thing is just how relevant it is now.

Of course, he’s moved on from that time even if the country hasn’t. Joking that selling places out as he does these days, is new. Furthermore he reckons he’ll be back here, in this room, next year for more of the same.

On one hand, you’d like someone with this talent to be somewhere bigger, perhaps. But then on the other, Beans On Toast is like he is because he does it his way, and those massive venues he played opening for Frank Turner a few years back? They aren’t his natural home. This is, and doing this, there is no one better.