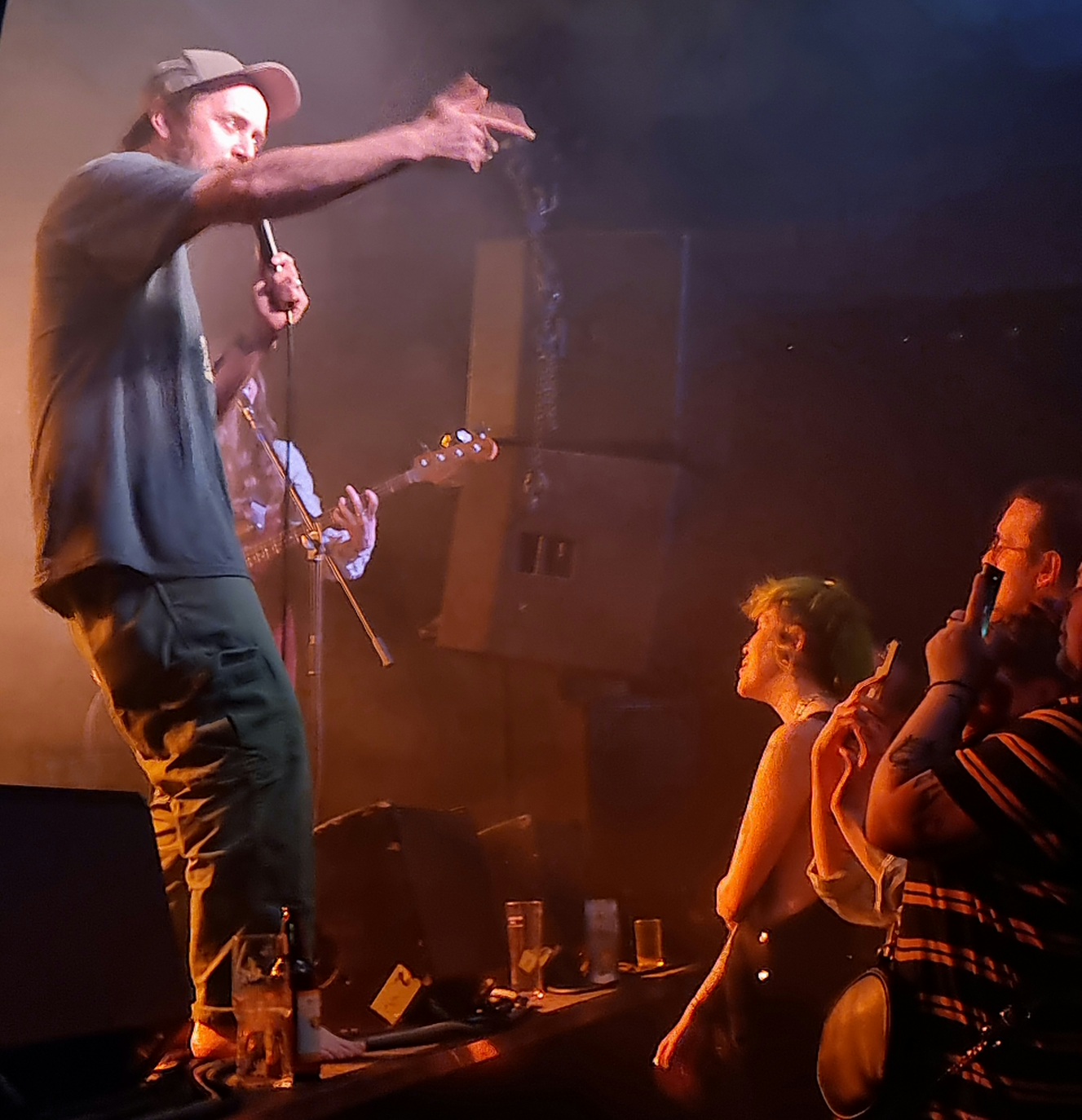 Kitty Liv, it simply has to be said from the off, has an incredible voice. The type that you see on those videos where you can’t quite believe the person singing is the one on the screen. When she plays her last song here, with no instruments beyond a harmonica she whips up a type of Fire and Brimstone thing. The rest of the set is still primal, but rather more soulful as songs like “Neck On The Line” have a wistful, warm feel. “Just One Kiss” rather underlines it, indeed love (and being in love) is something of a cornerstone of what she does. “I’m Coming Up (“about falling in love when you’re on drugs” explains KL) and “Feeling Of Wonder” (“about my first boyfriend, I must have been in a really good mood when I wrote it”) show an artist with no nasty edge. Even the song she does about depression “Team Strong” focuses on the friends that rally round, and even when she goes down a more Blues route for the title track of last year’s EP, “The River That Flows” it feels more like a pleasant meander. It suits her and her stunning voice, and Kitty Liv absolutely does things in her own, original way.

In the encore Beans On Toast plays a new song, possibly called “Back Out On The Road” – the mere title isn’t important – on which he discusses his love for playing his songs live, and, from where I am sat I look out across the crowd. There’s a couple of hundred here at a guess, and I’d struggle to imagine a setting in which we’d all be together ever again. All these disparate people brought together by music, by these songs. That’s the point, surely?

That’s the point of the new album, “Survival Of The Friendliest”, for certain. The idea that we will survive, and we will survive in spite of them permeates not just the record, but  the almost two hours Beans is on stage.

Flanked with Kitty Liv, and Jack Flanagan of the Mystery Jets (both of whom were on the album) he reels off a few of the new ones, “A Beautiful Place” – celebrating what we have – “Blow Volcano Blow” and the anthem for positivity “Not Everyone Thinks We’re Doomed” take on an almost anthemic feel here – and honestly, as I always say when I watch BoT it seems – there’s few with this connection to their audience.

There’s plenty of old stuff too (we’ll get to that in more detail) and the small details of what Beans does really hit home. “War On War” has always been a favourite of mine, but this time, not only does it feature some stunning harmonica from Kitty Liv,  it follows “Home When You Hold Me”, and throughout these songs the word “connection” keeps coming back to you again, because when you boil it down, isn’t that all you need?

“A Whole Lot Of Loving” underlines it, and when he plays solo and takes requests for songs like “Magic”, about the birth of his daughter and “Chicken Song”, there’s a gloriously unplanned feel, and there’s such a warmth about “Album Of The Day” (the one where he teaches his daughter about the classics) that you can’t resist it, and there’s such an empathy about the brand new “Got A Lot Of Work To Do” that this year’s record will no doubt be one to savour (again).

The war in Ukraine results in an impassioned rant that takes in everything up to and including the media coverage to the effect on soldiers themselves, “The Commons” is brilliant too, making a catchy “pop song” (his words) about trespassing cannot be easy, yet he does it.

“Logic Bomb” is funky as all hell – Kitty plays bass here – and “The Inevitable Train Wreck” showcases an album that will forever be one of my favourite Beans collections, while the cover of The Doors “Break On Through (To The Other Side)” is a diversion (“I can’t play anyone else’s songs but I’ve got talented musicians with me this time” he says) and the set ends with another of “…Friendliest’s” best. “Love Yourself”, like all of them, has fitted in so well too.

The encore is by turns funny and acerbic– the rant at “the nonce”, Prince Andrew gets my vote for sure – “Harry In A Helicopter” is a laser guided attack on the monarchy, but when it ends with “On And On” it’s so uplifting that this almost feels like a worship for most here.

And here’s my theory. It’s because we all feel like we know Beans On Toast. Hell, I know when his birthday is because he sticks an album out every year on December 1st to celebrate it. I know his life through his songs, and there’s something else too. He loves it.

Here, he plays “MDM Amazing”, his most popular song, and what he says when he plays it tells you everything about him. “People ask me,” he confesses with an air of incredulity. “If I get bored playing it because it’s so popular. Don’t be silly, that’s why I love it so much. Because you all do. And if you wanna see bored look at me in the jobs I had before this one.”

That’s why people keep coming back to see Jay McAllister every time he’s on the road, because he belongs here and loves being Beans On Toast, pure and simple.