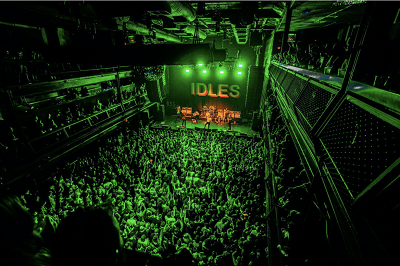 IDLES have just announced their return with new album CRAWLER, out November 12 via Partisan, their fourth in as many years and the follow-up to their first No. 1, 20’s Ultra Mono. And today they have shared Pt. 2 of the video for its first single, “The Beachland Ballroom.” The song, named after the iconic Ohio venue, is an honest-to-goodness soul song featuring a gorgeous, gripping vocal performance from frontman Joe Talbot. Directed by IDLES in collaboration with LOOSE.

Listen to “The Beachland Ballroom” HERE and re-watch Pt. 1 HERE.

“The Beachland Ballroom’ is a statement-making first preview of IDLES’ new material, introducing a heavy dose of soul into their pummeling, sneering sound—an unlikely swerve the band pulls off, in both surprising and satisfying fashion. Talbot blends his usual harsh barks with plaintive crooning …over an understated backbeat, organ hum and electric guitars that spend most of the song tightly coiled, only occasionally exploding outward.” – Paste

On CRAWLER, the group brings to life vivid stories of trauma, addiction and recovery with its most soul-stirring music to date. The 14-track project was recorded at the famed Real World Studios in Bath during the COVID-19 pandemic and co-produced by Kenny Beats (Vince Staples, Freddie Gibbs) and IDLES guitarist Mark Bowen. Pre-order CRAWLER HERE.

The band is currently on a sold out US tour, having just kicked it off in St. Paul’s Palace Theatre Chicago’s Riviera Theatre, two nights at NYC’s Terminal 5, DC’s 9:30 Club and more. Reactions to their live shows have been unanimously enthusiastic, one reviewer saying, “This one hurt, but in all the right ways” (Minneapolis Star Tribune) and “a sold-out show packed full of sweat, unity and hell of a lot of noise,” (Columbus Underground).  Explore Asheville remarked,”here was a band you could pin all your hopes on, ideals you could rally round, a set of songs you could believe in.”