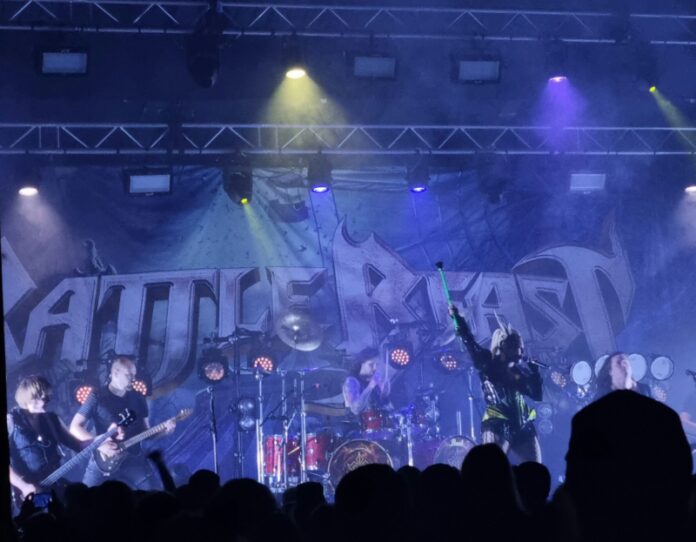 Future Palace have clearly come to the UK for the first time with the intention of making the most of it. Tonight is their second show here and frontwoman Maria is already busily welcoming people to the party. Energetic, compelling and with an impressive range, she provides the focal point, while Johannes’ drums and Manuel’s tight guitar playing ensure this is modern sounding metal with a real skill. “Ghost Chapter” is heavy “Hands Up” is clearly designed to play live, it lives up to its title, and gets a singalong going – a vibe “Fever” (“our party song” according to Maria) keeps going. Future Palace though, have a message too, as a deeply personal “Illusionist”, written about domestic abuse underlines. It doesn’t hide its anger, and neither should it.  Largely though, it is “Paradise” that suits the three piece.  Given that it leaves us with its hopes for a better future. Something we can all get behind, and Future Palace are as well placed as any to be in metal’s latest new wave.

In between bands tonight they’ve got a fabulous array of songs blasting out of the PA. Three strike me. “Pour Some Sugar On Me” gives way to “Hallowed Be Thy Name” after which comes “Shout At The Devil.” Watch Battle Beast for 90 minutes after that and tell me right in the sweet spot between Maiden, Def Leppard and Motley Crue there isn’t a leather clad band from Finland.

It’s almost three years since I last saw Battle Beast. At the end of that review I simply wrote this: “Absolutely unashamed and brilliant.” Many things have changed since 2019. Not that.

Battle Beast are the sort of band that metal needs. Brash, big, and skilful. In a world where less is more, they’ve forgotten the “less” part.

Earlier this year they released the brilliant (all their albums are brilliant) “Circus Of Doom” and they play nearly all of that – indeed, its striking the set is drawn exclusively from the last three records.

The opening title track is full on grandiosity and pomp. But what makes BB so good is that they recognise its all a bit of fun. It also helps that in Noora Louhimo they have an astonishing singer and focal point. She carries “Familiar Hell” and “Armageddon” comes with as much pyro as any of the arena dwelling rock bands going.

The fireworks are back for “No More Hollywood Endings” and like all their songs, it seems better cut out for Eurovision than Bloodstock, but make no mistake they’d fit in there too.

In the middle of the show, Louhimo takes a break and Juuso Soinio – one of four founder members still in the group – merrily sings “A Whole New World” from Aladdin for reasons that are unclear, albeit that is slightly easier to fathom than the Battle Beast Disco Invader, as ever, don’t ask!

The second half of the show is even more unhinged. “The Bastard Son Of Odin” is Viking Metal but not as you know it, he’s “born to kick your ass,” apparently. “Russian Roulette” is a beauty, shining like a gem, and although “Eden” sees goodbyes said they aren’t serious.

This is a big, bombastic group – and they’ve got a keytar – and it needs an encore. “Master Of Illusion”, King For A Day” and fists up in the air one last time for “Beyond The Burning Skies”.

They are metal. That’s it. Battle Beast are what every metal band should be. And here’s the thing. They are metal like all the greats – denim and leather brought them altogether for damn sure, they are proudly arena rock (smoke machines and fireworks are not just the domain of enormodomes, after all) and they do theatrics as well as anyone.

Battle Beast are magnificent. OTT is not a criticism here. It’s a way of life.