BAND OF THE DAY: UPPLOPPET 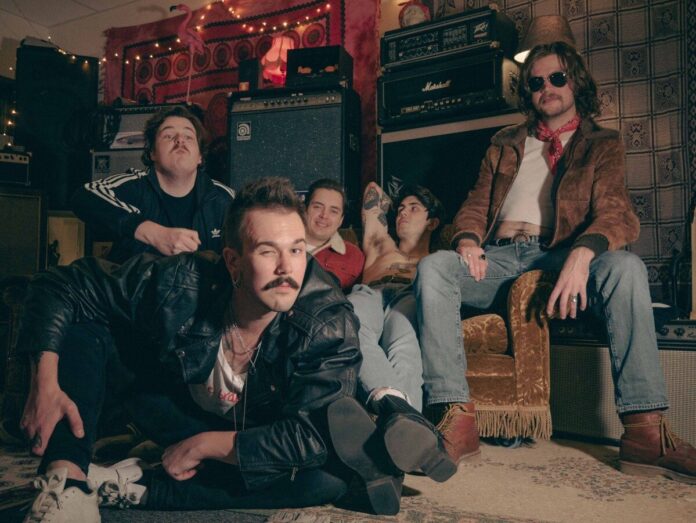 Swedish five piece Upploppet (“The Riot”) have joined The Sign Records. Celebrating the occasion, the Scandinavian garage rock group is releasing the stand-alone single “Golden Eyes”. With strong melodies, raw riffs, and palpable energy, the track offers a fresh approach to rock music, while clearly being inspired by many of the great names in rock‘n‘roll history.

“Golden Eyes” is available on all streaming platforms from the 16th of December. The single is released together with a music video made by Max Ljungberg. Upploppet are set to record a new album in the beginning of 2023.

”Golden Eyes is the new open door for us. When we showcased this to the label, they knew that they had struck gold”
– Kiffe Olsson, Upploppet

“It‘s amazing to see that Gothenburg, Sweden delivered again! The city have given us action rock acts as The Drippers and Scumbag Millionaires, they have given us the garage rock sound through Union Carbide Production and now they give us Upploppet. This city keeps delivers great music. I hear so many influences, from Dead Boys, MC5, Turbonegro and The Stooges. Rock is supposed to be wild and raw. This band raw and wild, it is the real deal.”
– Kaj, The Sign Records

Upploppet is the latest addition to the scandirock Mount Rushmore, with influences hailing from titans such as Gluecifer, MC5, Union Carbide Productions and many more. This just goes to show you that this band stomps all over rock n’ roll history with its own twist. The music represents the dangerous side och rock. With no prisoners being held, a raw attitude and a live show like no other, Upploppet is pulling the torch from the fists of the old geezer’s that once held it.

The band has already gone through the DIY process, recording several EP’s in their rehearsal space in the outskirts of Gothenburg, Sweden. Their latest DYI release ”You Wish This Was Live” (mixed by Tomas Skogsberg) put them on the face of the rock scene in their city. Without having to put out a full lenght LP, the band has already visited the outer parts of Europe and are now planning their next step to conquer the earth. Upploppet have previous released a bunch of raw digital singles and a split 7″ with Scumbag Millionaires.

With their latest singel ”Golden Eyes” (recorded and mixed in Welfare Studios) the band shows once again that they are evolving and getting stronger as a unit. The Sign Records noticed when other oblivious labels where kept in the dark, so they took Upploppet under their wings and released their single.

Upploppet is now in the making of their debut album in Welfare Sounds, which surely is a recipe for total destruction on the music scene. Everyone, put your seatbelts on and stay tuned.