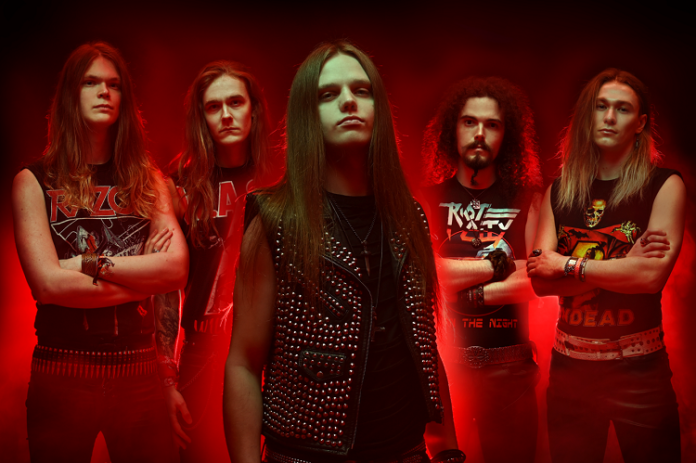 TAILGUNNER unveil their 2nd single Revolution Scream!After taking the underground Heavy Metal world by storm and hitting discover weekly, release radar, 12k streams and over 700 playlists on Spotify in the first month with their debut single Guns For Hire in January 2022, TAILGUNNER are back with a brand new single ‘Revolution Scream‘. Engineered by Olof Wikstrand of Swedish icons and Nuclear Blast artists Enforcer, the band drop their 2nd single March 13th!

“Yesterdays embers are ash now,the future always out of sight,we only know that it’s ours now -So take it, this is your right.“
A huge slice of melodic Heavy Metal, delivered in the sort of video rarely seen in modern day Metal, ‘Revolution Scream‘ is an anthem for the outcast in each generation. With hooks guaranteed to get firmly lodged in every set of ears, the band follow up their debut with a power metal anthem.TAILGUNNER are staking their claim to the future of the genre, standing defiant of the ‘rock is dead brigade’ and prepared to fight ’til the end for what they believe in – Deadly riffs, huge hooks, N’ lightning fast solos.

Recorded in the dead of the English winter whilst living in a Victorian chapel converted into the bands studio, engineered by Olof Wikstrand of Swedish icons Enforcer, and filmed at the Invisible Wind Factory in Liverpool, TAILGUNNER are flying the flag high for Heavy Metal!