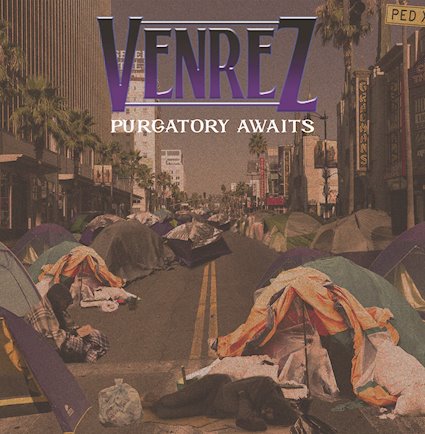 It’s odd, the things that go through your mind when you review as many albums and EP’s as me.

Like, faced with “Purgatory Awaits”, my mind immediately goes to The Sopranos.

Specifically, there’s a scene where one of the characters thinks he’s died and gone to meet Beelzebub. Wracked with guilt at his crimes he seeks solace from another character, and they have this exchange.

“You didn’t go to hell. You went to purgatory, my friend.

I forgot about purgatory.”

And honestly, I can’t lie to you here, I’d by and large forgotten about Venrez to match.  I’d reviewed their 2015 record “Children Of The Drones”, and I’d been to watch them a couple of times – one opening for a Richie Ramone.

In truth, when this six tracker arrived there was a bit of “do I know these? I think I do” and searching MV’s archives, but never mind my own history lesson. Look at some of the bands they’ve toured with. Alice Cooper, Buckcherry, Enuff Z Nuff. Crikey, its like a who’s who of my favourite bands, plus Stephen Perkins of Jane’s Addiction guests here too.

So, right, cool. You put on the first track. “Show Me” and there’s a bass groove from Gabe Maska, but there’s an urgency, goodness me. This is the best thing Stone Temple Pilots never wrote. And the solo, that’s an arena shaker, and Jason Womack is clearly something of a guitar hero.

That this isn’t even the best thing here is a testament to the EP, frankly, but after the huge groove of “Evil Words”, comes “Gin Fizz”. Brother, let me tell you, “Gin Fizz” is a proper tune, a banger, the kids call them.

Guitars that Slash would be proud of. A hook, a confidence, and ….something almost imperceptible. Like everyone else that loved Screaming Trees, I’ve been listening to them a lot since Mark Lanegan’s tragic passing, and there’s the same kind of understated insouciance running through this.

Then, the damn thing thunders. “Each And Every Day” is a turbo-charged injection, but throughout it all, Ven’s voice is laid back, like the music is happening in spite of him, not because.

Plus, American arena rock doesn’t often do social conscience as well as “Cartoon On Television”. Massive, swaggering, it might be both, but it still starts with the line, “depression and abuse at all time high’s” and it explains the illusion of freedom and democracy that we live under. Whether you buy into the beliefs, like I do, or just want to listen to an original, thought provoking song, this has got you covered.

The last one “ATM Machine” has a touch of bands like Killing Joke about it, harsh, abrasive, you can sort of imagine Prong doing it, and maybe we are all consumers, ripe for being picked by the corporations. This will do as a fightback, mind you.

Back in 2015, on that review of “…..Drones” I wrote this as a conclusion: “A frequently interesting and technically superb record, you are nonetheless left wanting something just a little more from it.” That was true then, and its equally as true to say that “Purgatory Awaits” is exactly what I wanted, so sweetly delivered delivered. A brilliant EP, and hell, I mean it.