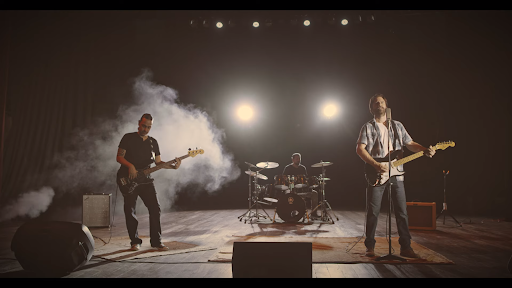 Salvadorian power trio Steady Rollin release their latest single Cause I Love You More – a whirlwind showcase of the band’s full talents. Like their namesake, the group rolls through movements with a track that will equal parts have you pumping your fist and will tug your heartstrings.

Telling the story of an undying love, vocalist and guitarist Fernando Poma’s lyrics bear the artist’s signature vulnerability that has endeared the band to audiences across South America and beyond. With his most personal song yet, Poma sets the stage for the three-piece group to each shine as the song moves between its different sections:

“With a trio you’re forced to play the best you can because nothing is hidden. It brings out the best of us.”

Opening with Poma’s stripped back guitar, Steady Rollin wear their blues-rock influences on their sleeves before leading into an odyssey through power riffs, pounding drums, and a pulsating bass. Shifting between moments of quieter introspection and all out rocking, Cause I Love You More paints a picture of a man heartbroken seeing his love in a relationship where she appreciated.

The song follows an extraordinary year for the band. Their debut album Love & Loss brought Steady Rollin’s classic rock dynamics to new audiences altogether. Their global efforts have seen the band through Colombia, Costa Rica, and 5+m views on YouTube showing off their commitment to unfiltered, pure musicianship and power, firmly rejecting technological trickery and focusing on the instrumental skills of the band and a return to real rock music that packs a punch!

Steady Rollin are Benjamin Andrade (drums + backing vocals), Gerardo Pardo (bass), and Fernando Poma (guitar + lead vocals). Poma has played music for as long as he can remember and continues through his obsessive fascination for guitars. Andrade’s was called to music by bands like Led Zepplin, Rush, and Metallica inspiring him to establish several successful bands of his own such as Kroma, Ultravioleta, and Alter Ego. Nowadays his time is spent between Steady Rollin and his role as Yamaha Music’s Salvadoran drumming representative. Pardo is regarded as a champion of El Salvador’s music scene, helping to give local bands the opportunity to play live around the capital, San Salvador.