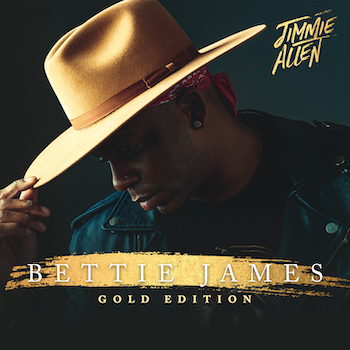 It’d be easy to listen to the first few seconds of “Get Country” – the opening song on “Bettie James” – and think you’d got it sussed.

“Sometimes you gotta take it down the back roads and get country, baby” says Jimmie Allen and you’ve got the same riff that millions have, and if that wasn’t enough, there’s a first line proper: “you know, there’s something about them dirt roads”, right cool.

Thing is, there’s a suffix to the album. This is the “Gold Edition”. A follow up to the original “…James” album from last year. Basically, Jimmie Allen got together with his mates and stuck out a load of collaborative songs.

We’ll let the man himself explain the rest:  “When it comes to music I love, I don’t really get wrapped up in boundaries or genres. I thought we were gonna stop with the collaborations with Bettie James, and then I was like man, there’s so much music out there that I love, so many artists that I love, and I just wasn’t done.”

And you what, I get it. My attention span is such that I reckon I’d make a record like this if I had the talent (or any mates, to be fair…). There’s a cast of thousands on this, frankly. “….Country” sees Locash get on it, “Home Sweet Hometown” – the type of thing that Luke Bryan would do for a laugh – is a duet with Lanco, but everyone is just getting started.

Some of these are sensational. Not least of which is the superb “Boy Gets A Truck”. Originally on Allen’s debut record, this version with Keith Urban is mighty, “Livin’ Man” with its relaxed feel (and with Neon Union) is top quality too.

Some of the call and response duets are especially clever, “Tequila Talkin’ has a real pop feel, but Linday Ell’s bit takes it to another level, and there’s much to admire about “Drunk And I Miss You” too.

We can’t underestimate the level of guest that are on here. Tim McGraw on “Made For These” and its 80s flavours, perhaps the best of them all “Freedom Is A Highway” has Brad Paisley on it, while there’s something of real depth about “Why Things Happen” – Darius Rucker and Charley Pride and their vocal interplay notwithstanding – and its bewilderment.

There is a feeling of a kind of Gospel undercurrent about the whole thing, but “When This Is Over” makes it plain. A similar kind of vibe to “We Are The World” or something, and the way the Oak Ridge Boys” overlay the end, has some gravitas. A kind of fulfilling of the epic intent, as it were.

The presence of Noah Cyrus on “This Is Us” has it nudging 50m Spotify streams at the time of writing – and its pulsing sound is an almost perfect single, too.

Granted, by its very nature this is a record that is going to go down the odd rabbit hole that you aren’t investigating. “flavor”, is a little too Latin and a little too R and B for these pages, and likewise “Somebody” is perhaps a bit too Justin Timberlake for MV, but there’s more to unite than divide.

“Pray” is a good insight though. I am not a religious man in any way, but there’s a darkness to the lyrics as he searches for purpose, that beguiles, and the album itself does the same.

A brave record in that it really pushes the boundaries, and the conservatives in country probably don’t think its country at all. Jimmie Allen, though, is too talented to care. He’s out there making the music he loves, and fair play to him for that. Some of this is solid gold.