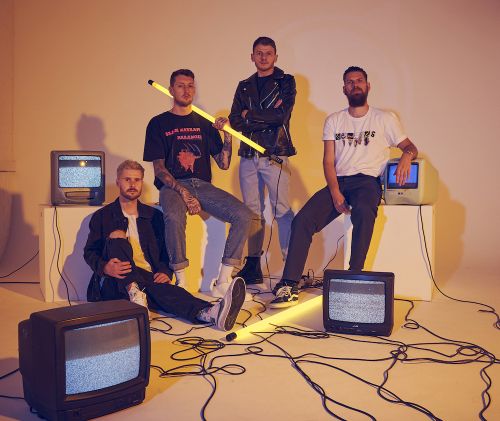 Born out of the North East, Stay Free operate between the gritty, alternative rock sound while flirting heavily with big pop sensibilities. Somewhere between the light and dark, the love and noise, the nostalgia and now…This is Stay Free.

Having gained invaluable knowledge and experience from their time as Boy Jumps Ship, the band have spent some time away from touring and tirelessly honed their craft with Grammy award winning producer Jason Perry. When it came to releasing music again, the band felt that they needed a fresh start and that their music had naturally evolved into what is now Stay Free.

The new single ‘Future Self’ is a fresh 80’s inspired rock anthem with a modern twist, adding a revolutionary feel to the bands energetic style. The track is twinned with a vibrant, neon performance video directed by Zak Pinchin, who perfectly captures the dynamic of Stay Free and their music.

“We’re so excited to release new music, it’s by far the most exciting thing we have ever been a part of as musicians, and we’re excited to get it out there and release new tunes consistently. Working with Jason was a blast, it’s the most fun we have ever had in the studio.”

Check out the video for ‘Future Self’ here:

Having previously spent a number of years as Boy Jumps Ship, the members of the band have naturally evolved over time and with that, their musical tastes and influences have also matured, which naturally lead to a progression into a new chapter of the band.

In their previous endeavor the band received support and acclaim from medias such as MTV, BBC Radio 1, Kerrang TV, Kerrang Radio and Rock Sound, plus toured with the likes of Don Broco, Young Guns, Marmozets, Patent Pending, Arcane Roots and more.