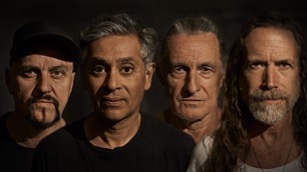 SHEER CEREBRAL POWER is a 4-Piece progressive-Rock outfit based in Munich, Germany but with members coming from as far and wide as Detroit and Pakistan.

This music is a reverence of the progressive rock of the 70s/80s/90s/00s. Strongly influenced by King Crimson, Genesis of the early 70s, Allan Holdsworth, Bill Bruford, John Wetton, Eddie Jobson, Rush, Tool as well as a healthy dose of Zappa.

All of SCP’s tracks are thematically inspired by Muhammad Ali and his great 1974 fight in Zaire.

The band says this about BLOW “Written in 11/8 time. This tune was inspired by watching sparring during box training. The musical inspiration is from Igor Stravinsky, Sacre du Printemps: The Augurs of Spring: Dances of the Young Girls” That is also why we used Ayssa Lopez_Martinez and Anna Gnizdiukh two highly
ambitious female boxers from the Boxing Association of Munich to fight to the soundtrack. An uptempo number with an unusual double time chorus section which gets subdivided into a groovy Reggae Groove a la Stewart Copeland. A song about hope and action.”

Azhar began the writing process in 2021 when he sat down and wrote the 15- minute suite “Sucker Punch`d” Opus 1 in E-flat in 5/8 time. It forms the context of the  content of this band. All the songs have irregular meters, as the rhythms of nature do not  use regular beats. The music was not recorded in a copy/paste process, but within a  given framework. All musicians played their voices throughout.