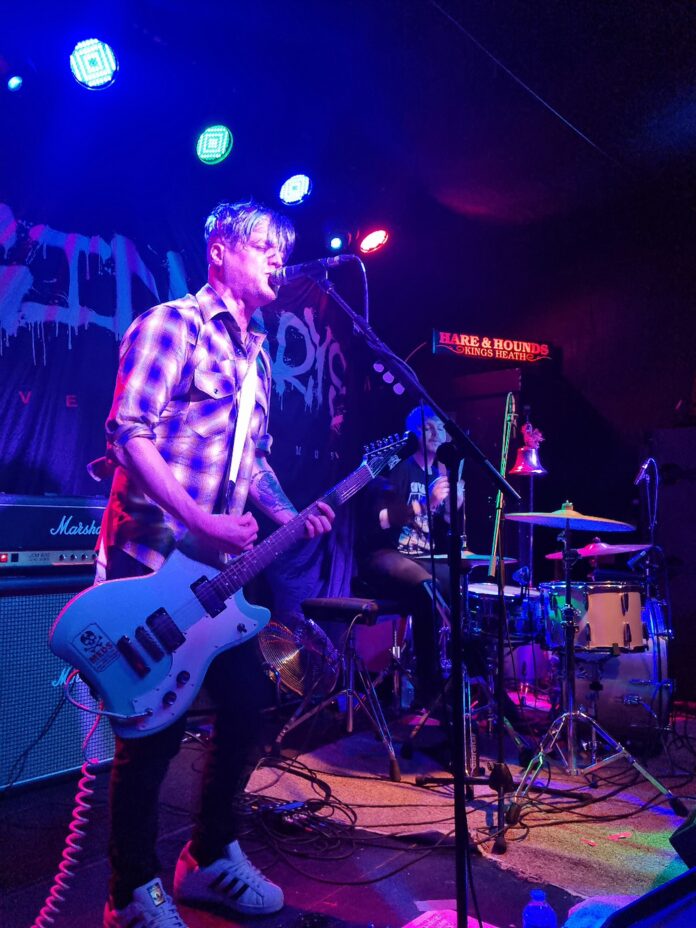 Sometimes you have to see a band live. We’ve reviewed Derby’s MuddiBrooke’s EP and proudly had them on the site a few times, but watching them play here you are struck by just how raw and aggressive their sound is out of the studio. “Liverpool Guy” was fabulous on the EP, but when it kicks in here and Brooke sings “I’m not easy ” in it’s hook, you’d best believe she means it. That one is what we might call the “archetypal” MuddiBrooke tune, given its searing honesty and heavy hook, but its not on its own here. “Turn To Dust” – another from the EP – and a brand new one about “being locked in a cellar, its nothing kinky…..” isn’t given a title but it shows the new record is one to look forward to. New drummer Morgan Pettigrew provides a real thunder on his kit and bassist Anna Mellidone is the perfect foil for the hypnotic Brooke, and as they end with “Devil” (“it’s about a real arsehole”) facing down their demons, this appears to be a band that’s about more than music. It seems to be a form of catharsis, and this is a group that means every word.

Back in January 2020, Anchor Lane released their debut, “Casino”. On the review of the album on this site, I drew comparisons with The Virginmarys, and said that the Glaswegians were not a conventional “classic rock” band. So although things have changed since (for one thing they are now a three piece with no bass player and for another, new drummer Graham is in fine form), they haven’t changed that much. But my goodness, they are a force of nature here. They go down a storm, but you couldn’t resist them if you tried. Singer Connor (he plays secondary guitar when required) has an energy which takes on a life of its own with “Choke” or new song, the lyrically serious “Stutter”. Both are delivered as if they are making a statement here. And they are. “Call This Reality” also shows guitarist Lawrence’s skill. They are heavier than you’d imagine from listening to that debut, and even when they play something from it, “Fame Shame”, it doesn’t sound quite the same as it did. A band that are already good, but are set to get better. Connor mentions their new album about 10 times. When it arrives, it could be special.

Before The Virginmary’s come on stage tonight, as you do, we reminisce about the other times we’ve seen the band. This is the fourth for MV since lockdown ended, but the first time was the 5th March 2013. In this building, but not in this room. There’s two things here. First, it shows how long they’ve been doing this, but second, it is my contention that since they went to a two-piece, they are better than they’ve ever been.

Ally Dickaty and Danny Dolan give their all to this band. From the minute they arrive with “Meds” – a recent single and a prime example of their new, almost punk sound – they are, as they always seem to be, the most focussed group you’ve ever seen.

At this point in their careers they have a back catalogue of brilliant songs. “Dead Man’s Shoes” from their debut, “Into Dust” (a disclaimer, it’s one of my favourite songs) and “NYC” (“its not a patch on Birmingham” smiles Ally) are right amongst them, but there are 19 songs here, and each one is delivered with such passion as to be incredible.

“Portrait Of Red” is still a glimpse into a world that I don’t understand, and if “Lost Weekend” is the sort of half-time break – certainly Danny sits down on the stage to try and get his breath back – then the second half has no let up.

Dickaty literally drips with sweat and Dolan beats his kit in the most primal way, and then “Motherless Land” and “Free To Do Whatever They Say” are the products of that, and there’s a classic from their past peppering it every few tracks, like “Just A Ride” does towards the end.

Before this tour, the band had asked the fans to pick some songs for the set. It’s a longer one than usual, and one of the selections from the fans, “Dressed To Kill” has been dusted off for this run. It’s welcome too.

It ends with the two it usually does, “Look Out For My Brother” – the one that seems like their anthem – and “Bang Bang Bang”, but there’s something equally important after the music ends, and the pair go and meet their fans, many of whom appear to be friends just as much. We speak to a few, one chap who came up from Hampshire, another that came from the North East and has followed them all over the tour.

That’s important, because as much as this is a band, it’s a community, and that sense of warmth is all over this show. 75 minutes in the company of one of the UK’s finest and most hard working live bands would be good enough, but it mattered way more. The Virginmarys are simply the type of artists that should be held as an example to everyone else as to how to do this stuff.