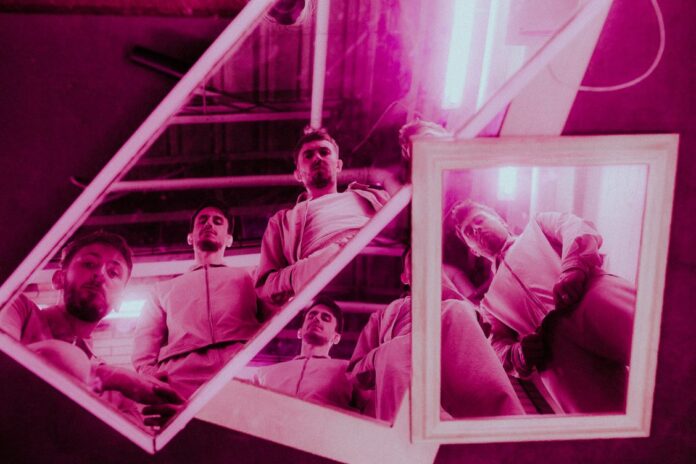 “What now?” echoed the frivolous girls, picking their skin, biting their curls. “What can we do? Where can we go? If we try to hide, MOSKITO will know.”

Following the successful release of their debut single, new Punk Rockers MOSKITO are back with a powerful burst of frantic chaos. Their new single ‘Don’t Touch My Baby’ encapsulates listeners into a fever inducing cacophony of dark melodies. A pair of brothers front the stage tapping into a chemistry which spearheads a powerful, confident presence amongst the quintet.

Recorded with Thomas Mitchener at Broadfield Studios, (Frank Carter & the Rattlesnakes, Queens of the Stone Age, Tyler the Creator) the sophomore single sees the band take their strong sense of melody and emotive aggression and meander it into a more punky and hateful direction.

The band are also delighted to announce that the official music video will premiere on their YouTube channel on Tuesday 11th January.

Describing themselves as “Gritty, British, and in your face” MOSKITO build on a platform that has been strong from the get-go.

“Don’t Touch My Baby is a dark story of rage and aggression. It’s an envious statement delivered in the form of ‘love song gone wrong,’ explains front man Jake Rudd. “It’s something that can be interpreted differently with each listener’s unique experiences”.

The band’s first debut single ‘Gone With the Girl Next Door’ made a huge impact right off the bat receiving praise from the likes of Kerrang!, Planet Rock, All Punked Up & BBC Introducing, whilst acquiring their rightful spot on huge Spotify playlists.

‘Don’t Touch My Baby‘ continues to prove why MOSKITO are a force to be reckoned with right now. Their journey as an ensemble is refreshingly relevant in such uncertain times. Crafting deeply honest yet antagonistic music that allows listeners to lose themselves through spontaneous mayhem. With their first two singles under their belts, MOSKITO have 2022 for the taking which will see them on the road with their first run of shows in March coinciding with a debut EP release.