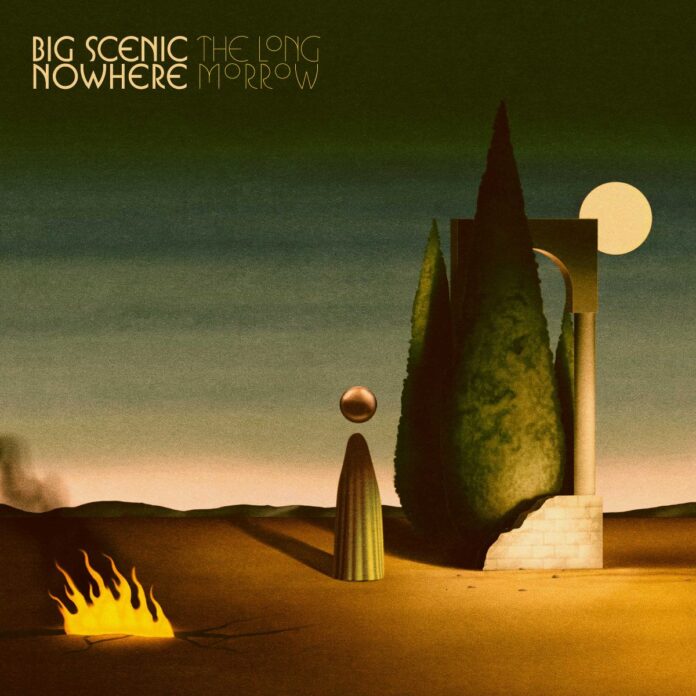 BIG SCENIC NOWHERE is the ambitious project formed by Bob Balch (Fu Manchu) and Gary Arce (Yawning Man) on guitar, quickly joined by Tony Reed (Mos Generator) on bass, vocals and keyboards, and Bill Stinson (Yawning Man) on drums. The band`s debut album ‘Vision Beyond Horizon’ was released in early 2020, followed by an EP ‘Lavender Blues’. The guys now have a further EP ‘The Long Morrow’ due out this month.

This extended play opens with `Defector (Of Future Days)` and it`s a real marker, a flavour of what`s to follow. There are blistering guitar riffs, pounding drums and vocals that seem almost distracted floating in, around and atop. There`s a stunning guitar solo three parts of the way through, a cracking appetiser of a song. The intensity continues with `Murder Klipp` which became quite anthemic at times. I felt it had a more grungy texture and the vocal delivery was at times evangelistic and the chorus “Put your hands in the water, It’s feeling cold inside, Put your trust in a feeling, In feeling paralyzed, Put your weight into walking, Over the thin ice” would certainly convert me. Just over the midway point we enjoy a brief respite with vocals and an almost orchestrated string like arrangement before we return to the path previously trodden on this journey.

`Lavender Bleu` on the face of it seems to be a shortened version of the thirteen minute epic `Lavender Blues` from the previous EP but with lyrics. The vocals are quite gently shared which really adds to the ambience of the piece and made it wonderfully mesmeric. The number does have some occasional guitar solos and the vocals become a little more forceful in the latter section but it still retains that hypnotic sensibility. There a more belligerence about `LeDü` which seems to encourage us to wake up and realise what`s happening and how we are being misruled or badly led, but maybe that was my interpretation. Nevertheless it`s a driving heavy rock out of a number.

The final cut, the title track `The Long Morrow` clocks in at a little under twenty minutes and has guest performances from both Reeves Gabrels (The Cure / David Bowie) and Per Wiberg (Opeth / Spiritual Beggars). I have to say it was a sheer delight. We enjoyed all sorts as this journey progressed and the song evolved, such as a guitar solo that both Joe Satriani or Steve Vai would be proud to have shared themselves. I felt I had been taken to another place on it`s conclusion.

There was an almost maturity or a sense of a band growing together with this Californian rock collective on ‘The Long Morrow’ .

This release really lays a marker down in the ground for those to follow and it`ll be hard for many bands to top this opus, this year.