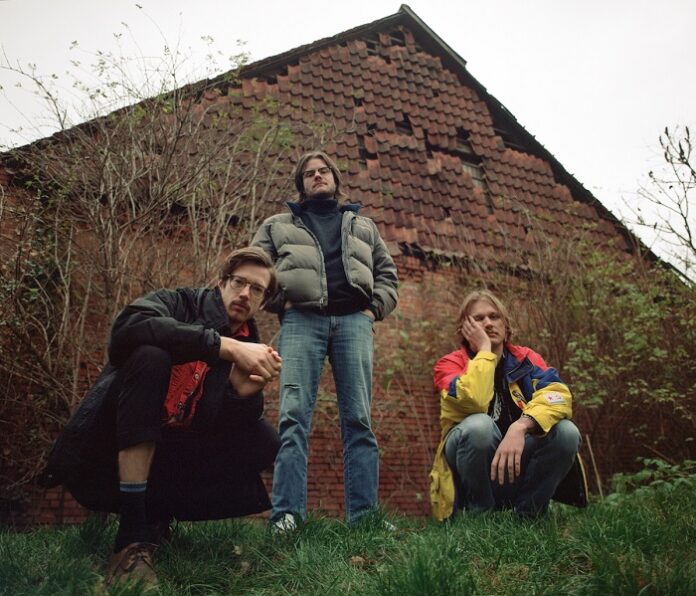 Koblenz, Germany alt-rock trio LIOTTA SEOUL are today pleased to announce that their new album WORSE will be released on 4th November 2022 via KROD Records.

The record is available to preorder on vinyl now: https://liottaseoul.com/shop/

To celebrate the news, the band have released a video for new single and sad banger ‘Beauty Salons’ which is out now on all good digital service providers, firing straight onto Spotify’s All New Rock and Alternative Noise playlists.

Showing a more introspective and gentle side to their many-faceted songwriting, the track features guest vocals from pop-newcomer THALA, who helped make the song a downtempo emo anthem for anyone struggling with that Sunday feeling.

The track examines relationships growing apart, romantic ideals vs reality, and the way break ups can impact our self-confidence and self-image.

“It’s about all the flaws and shortcomings I see in myself,” says singer, guitarist, songwriter, videographer and visual mastermind Sven Int-Veen. “Sunday is the last day of the week before everything starts over and you’re reminded of the things you didn’t accomplish.”

In opposition to the grand 3D-animation-massacre that accompanied lead single ‘Hypernormal’ (which drew support from VISIONS, KNOT FEST, Total Rock and more) the video for ‘Beauty Salon’ is a one-shot, recorded to VHS tape—the band prove their sensitivity for visual communication yet again, and show that they can look as diverse as they can sound.

The single’s chorus refrain of “that’s why I don’t like Sundays” echoing a worldwide smash hit from 1979 makes absolute sense; Liotta Seoul’s alternative-grunge sound isn’t about being “current” at all costs, but instead taking cues from the classics and sounding fresh and relevant nonetheless.

Liotta Seoul are the kind of band who always seem to find a way to transform their relatable frustration into a seemingly infinite stream of creativity. Only last year they released their EP cool. with four music videos and a self-made browser game.

A couple of weeks ago they released the album’s lead single ‘Hypernormal’ and started their own podcast “Liotta Seoul Cast”, and they’re also playing an ever-expanding string of live dates in their native Germany over the upcoming months.

Ahead of the release of forthcoming new album WORSE at the end of the year, the band are set to release a whopping 6 more singles with 6 more unique, highly creative music videos, so expect to hear their name a lot more in the near future.

Although originally hailing from Koblenz, Germany three-piece Liotta Seoul have a nostalgic, international sound that crosses borders and boundaries effortlessly. When people say ‘they don’t make ’em like that anymore’, they haven’t heard this lot.

With lyrical themes that surf the increasingly dystopian zeitgeist of modern life, their bold use of gnarly vocoder effects and an all-or-nothing vocal performance make for a grungy, alternative rock sound that’s been brought bang up to date.