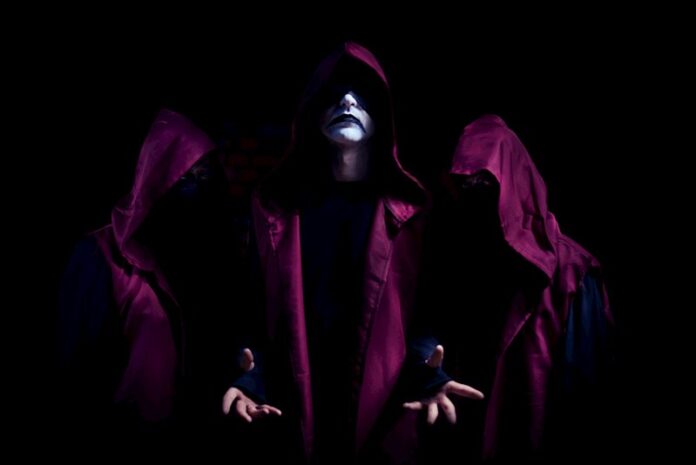 Massively captivating and lively alternative rock mob, KING OF THE DEAD are primed to unveil their colossal new EP, The Summoning, with an accompanying full comic book, on Friday 1st October. The menacing rockers have also set loose their brand new single, Damned. Watch the video for the track, here – https://youtu.be/gbTgyaWW0Yk .

KING OF THE DEAD are a band who are fearless, bold and daring. The enigmatic and profoundly absorbing horror rock combo are a celebration of the grisly and the bizarre. Delivering hooky nuggets that are intensely anthemic and massively inviting, the three-piece pitch sledgehammer rhythms against massive choruses backed by gigantic drumming. The end result is pure brilliance.

KING OF THE DEAD are revealing a story through a succession of songs, videos and updates from an mysterious masked individual, the Familiar. As described by the trio, he is the public face of the band – an individual that sits between worlds – the earthly realisation of secretive ancient forces. With a focus on theatrics, exhilarating music and a visual style reminiscent of horror films and comic books, KING OF THE DEAD are governed by a strong drive. The band’s incoming EP: The Summoning, is a tale of sacrifice, possession and the occult. Musically, the record is a heady amalgamation of infectious alternative and punk rock that tips its cap to the likes of 30 Seconds To Mars, Ghost, and Alkaline Trio.

Five singles have been released. The story started with Control, and was followed by Destroy My Name, a song about removing yourself of restraints. Running Out Of Time rapidly ignites the senses, while the group’s last single, With Love, is a spectacular piece of exhilarating and driving alt-rock. Their final offering is the blazing track, Damned, which concludes The Summoning in delightful style.

This is just a beginning for KING OF THE DEAD as the space of the storytelling is intensifying. Embrace the fear and behold the Summoning.