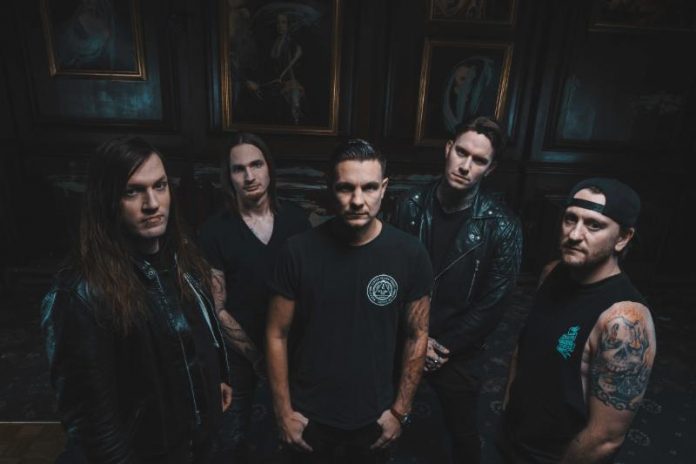 Michael ‘Moose’ Thomas has seen it all. As a founding member of Welsh metal titans Bullet For My Valentine, he lived a rock’n’roll dream that few ever get to see with their own eyes – winning awards, selling millions of albums, touring with his idols, and playing numerous sold-out headline shows, becoming one of the biggest metal exports in UK history. After parting ways with the band he formed to focus on his family three years ago, 2019 sees the drum extraordinaire back where he belongs in international new band Kill The Lights.

“I’m super grateful and excited to be back. I can’t wait for everyone to hear this,” grins Moose, of the new project completed by singer James Clark [Throw The Fight], guitarists Jordan Whelan [Still Remains] and Travis Montgomery [Threat Signal], and bassist Davey Richmond [Glamour Of The Kill].

“When I parted company with the old band, musically I was just sitting around doing fuck all and realised I had worked too hard and come too far to turn around,” continues Moose. “I thought I’d get in touch with Jordan and sent him a text asking, ‘Got any riffs or what?!’ Before I knew it, he had sent me 30 or 40 songs. I was like, ‘Erm, okay!’ I couldn’t believe it.”

“I’m a hobby songwriter,” explains Jordan, “which means I’m writing every day, whether it’s for a band or not. I’ve known Moose since I was a 19 year-old kid. Funnily enough, his first tour in the States was opening up for my band, then he said we should jump on a tour with them through the UK – which ended up being the Kerrang! Tour of 2006. The chemistry was there right off the bat and I knew right away this could be something that takes over the world.”

Frontman James Clark joined after auditioning on a demo of what would become the group’s debut single, ‘The Faceless’. “We all want to do something fresh, and for me it was about exploring some of the throwback metal more like Maiden or Priest that I felt had gotten lost over the years, but in a new way, ” says the singer. “’The Faceless’ is a song for those that have spent their lives in the shadows, never felt good enough, or just struggled to fit in or feel a part of something. The song is a message to the broken… it’s time to be seen, it’s time to be heard. From darkness to light we are all the same – we are the faceless.”

The track was recorded in Blackpool with esteemed producer/mixer Colin Richardson [Slipknot, Trivium, Machine Head]. Directed by Video Ink, watch the official video for ‘The Faceless’ at:

If you get the feeling Moose is making up for lost time, that’s partly because he’s learned just how loyal his fans have been over the downtime since his exit from the band he started as a 17 year-old at the height of their career. He’s kept his feet firmly on the ground and remains grateful for the unwavering support shown for his next creative venture. “Fans didn’t have to stick around on my social media but they have,” appreciates the drummer. “People have stayed with me asking what’s happening next. Metalheads have always been amazingly loyal, there’s a real community out there. I definitely think this album will surprise everyone and it’s all guns blazing for 2019 – starting with our first single and video right now. All I’ve ever wanted to do is play heavy metal and that’s all I will continue to do.”

Merging contemporary metal with very classic British influences, Kill The Lights are a tornado of neck-snapping rhythms and skyscraper chorus hooks, determined to make 2019 their own. Stay tuned for more updates coming soon.