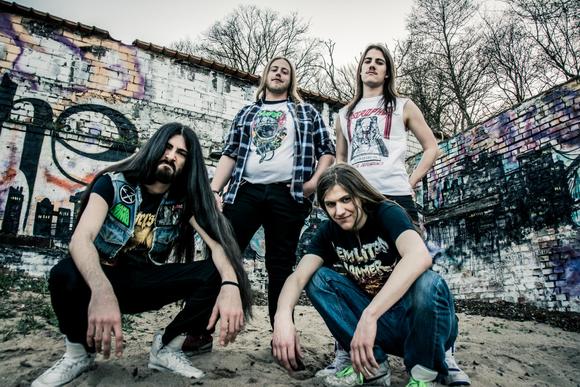 Ever find yourself staring at your old denim vest with the many hand-sewn patches and the slight fragrance of beers past, feeling nostalgic about the good old days of thrash metal? Sure you do! But it’s about time to stop being a wimp, grab that sucker out of the wardrobe and head to the nearest moshpit to bang your head until it comes off, because FUSION BOMB are finally here to keep your vest and metal spirit alive with their first full-length album! Titled ‘Concrete Jungle’ and set for a release on January 26th 2019 with Iron Shield Records, these four youngsters take everything that made 80’s thrash so great, updated it to a modern standard while never losing their very own twist!

Recorded at the Holtz Sound Studios in Tuntange (Luxembourg) by the band itself, ‘Concrete Jungle’ has been mixed and mastered by US based producer Chris “Zeuss” Harris, who is known for his excellent work for bands alike Municipal Waste, Revocation or Hatebreed. The result is a timeless piece of aural assault that sounds so fierce and brutally fresh, as it can only be the natural follow-up to the band’s 2016-debut EP ‘Pravda’.

Says the band: “Thrashers and Thrashettes, even though we have some more weeks to wait, we are beyond excited to show you our upcoming masterpiece: CONCRETE JUNGLE is our uncompromised statement against everything that made Thrash Metal irrelevant and replaced its artistic value with pizza and beer. We believe to have achieved an unprecedented mix of good old skanky crossover with the implacability of modern Thrash Metal. It is a 100% guarantee to waste your neck and shatter your elbows in endless cyclones. Let the slammin’ begin!”

Luxembourg, anno 2010, just when puberty truly struck and thrash metal has been the bee’s knees, FUSION BOMB went through nuclear fission and the band saw the light of day. Puberty has mostly faded, but passion and dedication have stayed. As it’s tradition, the first few years were spent with jamming and drinking beer together, before the work on the band’s first EP ‘Pravda’ started. Due to FUSION BOMB’s interest in the history of the Soviet Union, they chose it as the central lyrical and musical theme for their first output.

Being a young and motivated thrash metal band, there is certainly nothing more enticing as being on stage, which is why FUSION BOMB never stand still to wait for their fortune, but instead played the crap out of stages of all sizes: As support for Megadeth, Tankard or Dust Bolt, FUSION BOMB have already impressively left their first stamp in nowadays thrash metal scene. Inspired by bands such as Exodus, D.R.I. and Violator, FUSION BOMB are here to fight false Metal and cheap Pizza-Thrash. Coming as CD and Digital Download on January 26th 2019 with Berlin-based label Iron Shield Records, you better get ready to reload your bullet belt and shine you high-tops, because the pit is about to break loose!