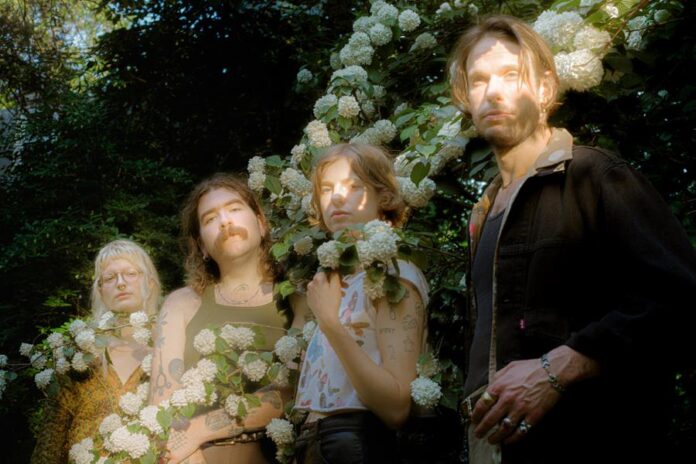 On the track, Catherine Elicson’s razor sharp delivery serves as a counterweight to the instrumental onslaught. “‘Born 100 Times’ is structurally very simple, consisting of a couple of hooks and a verse sung overtop of two repeated chords. I imagined a restructured pop song, having it start instantly with the hook and then eventually reaching a verse. While the lyrics are a somewhat spiritual reflection on devotion and power in one’s life, an isolating and very internal experience, the video offers a different viewpoint,” Elicson says.

“The video began as an idea Randall had of us showing up with cameras at the New York State fair. There’s something beautiful and nostalgic about a fair we wanted to try and capture. Two friends, Halle Ballard and Johnny Costa, filmed us having real, uninhibited fun running around, eating fried food, absolutely dominating the carnival games, drinking countless wine slushies, getting spun around on rides, and just enjoying being together. It was a much needed night of leisure at the end of a long summer spent preparing for the next phase of Empath. The video is a document of this special moment in time for us. United together, we left behind the isolating, internal struggles of our lives and connected to the real world outside of ourselves.”

The noise punk quartet from Philadelphia, PA comprised of Catherine Elicson, Garrett Koloski, Emily “Jem” Shanahan and Randall Coon, have been called “America’s most inventive young psychedelic band” by Rolling Stone, with Pitchfork hailing their music as “a thrilling rush of punk violence, pop sparkle, art-rock experimentalism.” Early shows here in the UK saw consistent support from The Guardian, who said they would go on to “surely bigger things” and The Wire who heralded them as a band “making noisy music that swings with immensely catchy hooks”.

Empath are currently on tour Stateside, with an enviable set of shows alongside the likes of Modest Mouse, Future Islands and Fucked Up.