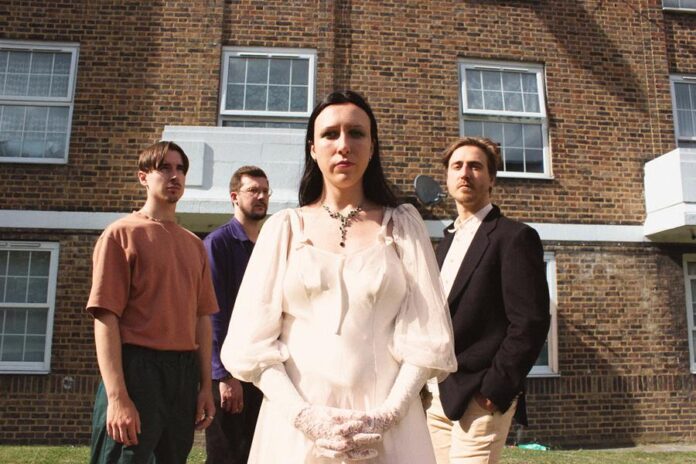 Bedford’s Dog Race believe in the power of patience, having built a feverous word of mouth buzz locally and for a series of mysterious, often last-minute DIY shows across London. Today they release their claustrophobic debut single “Terror”, as strong a first release as you’ll hear anywhere this year. “Terror” was produced by Jessica Winter (Pregoblin, Jazmin Bean) and mixed by Jon McMullen (Wet Leg, The Comet Is Coming).

The single intertwines darkness and light – from the gothic intonations of Katie’s vocals, through to the looping, cyclical warmth of the guitar lines and creeping synths. Frantic, melodic, ever-engaging, “Terror” was one of the first songs written by the band, and was recorded pre-pandemic – they’ve had to wait, an embryonic band suspended in stasis like so many others, safe in the knowledge they had something special on their hands.

Vocalist Katie Healy had the following to say about the themes behind the single:

“Terror was written during a time of DPDR and anxiety episodes where I would frequently wake up screaming in the night due to night terrors. I tried to encapsulate something that spoke of a period of turmoil but important growth in my early 20’s, an experimental experience where I thought if I’d embrace these night terrors instead of hiding from them in the hope I could put them to rest completely.”

In support of their first release the band will headline Bedford’s Esquires on the 19th August.