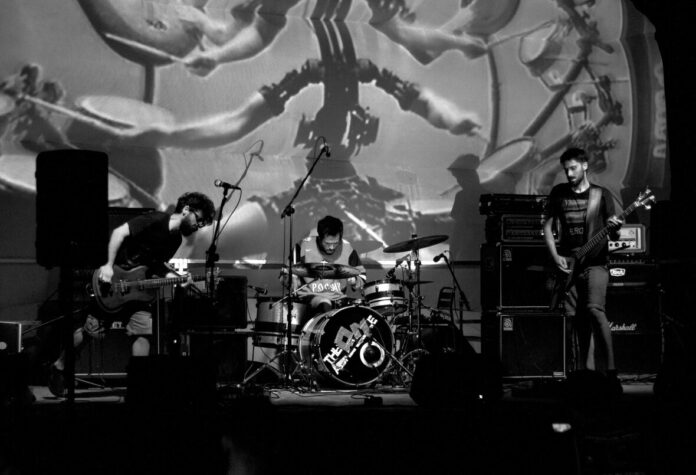 Announcing the release of a new album titled “The Chemical Bath,” the second in their career (and the first with the current lineup, the result of a reorganization four years ago), Demikhov release a new single to serve as the opener for this new chapter.

“The Leader is Dead and Everyone is Grieving” is a massive, caustic, impactful track that breaks away from the initial noise-rock sounds to embrace markedly post-hardcore dynamics and changes, a perfect synthesis of the band’s new direction.

LISTEN TO THE SINGLE: https://youtu.be/T2CdXnVfzX4

Right from the title, the track expresses the main components of Demikhov’s artistic quest, both in terms of the strictly musical and compositional aspect and the concept that underpins the entire creative process: an immersion in the darkest period of early 20th century Soviet history, in which the claims of modern science to preserve life by treating human bodies as mere building material intersect with the political and religious excesses of the new ruling power.

The addition of vocals is also a novelty, for those who remembered Demikhov as an instrumental band:

“Once the song was closed, we initially rehearsed “The Leader Is Dead…” live as an instrumental piece, without imagining that we would write and shout lyrics to it! We never imagined that a particular vocal line would strike a chord with our pieces. Then, in mid-2019, we attended The Body’s concert in Milan, at Macao: those high-pitched, ungainly screams, in apparent contrast to the dark, compact sounds of the guitars, were a revelation. Soon after, Zano began to put the microphone next to the guitar!”

It also marks the first record under the Demikhov name edited by the band’s own studio Produzioni Rumorose in Desenzano del Garda (Italy):

“The possibility of handling every stage of recording as well as composing, exploring the full potential of creating directly in the studio, pushed us to work more carefully on the record, trying to immerse ourselves in its realization from top to bottom, without haste but with playful curiosity. Only master and graphics were entrusted to others, to James Plotkin and Officina Infernale, respectively). Thus, we were able to try and try again the different solutions that lay before us from time to time, testing them live as soon as a stage allowed, before delivering the piece to the recording tapes.

Before the whole record was finished, in fact, we were able to rehearse “The Leader is Dead and Everyone is Grieving” all over Europe, and in different contexts, thus fine-tuning a piece that combines the most furious parts we have ever written so far with more dilated, high-intensity passages.”

“The Chemical Bath” is to be released in January 2023 by DioDrone Records in Italy, Bulgarian independent label Kontingent Records and Greek Sweetohm Recordings.

The album’s entire artwork was curated by Andrea Mozzato, known as Officina Infernale, one of the most visionary and lysergic artists around, who has once again managed to combine the use of the most perturbing imagery with a traditional imagery that permeates our entire everyday life.