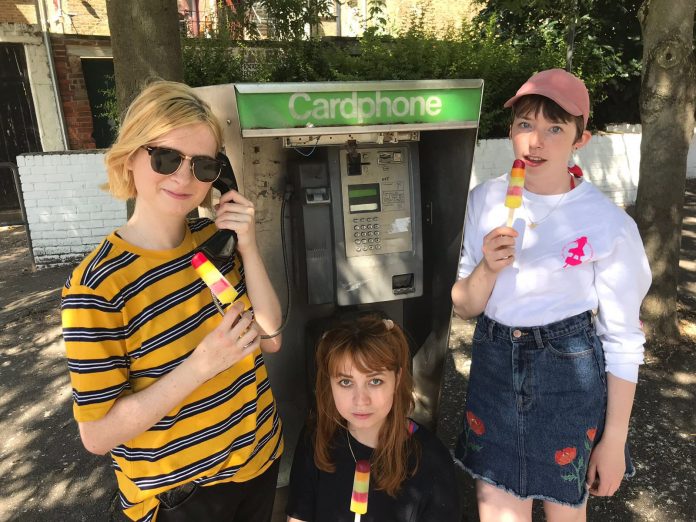 London indie punk trio cheerbleederz are pleased to reveal an animated video for their new single ‘staying up late’, the latest track to be taken from their debut EP faceplant out now on Alcopop! Records.

The record is available to purchase now in various bundles including a t-shirt and limited edition cassette release: https://cheerbleederz.bandcamp.com/

Beautifully illustrated and animated by friend of the band and long time collaborator Jono Ganz, the new video homages 90s TV classic Sabrina The Teenage Witch as one adventurous cheerbleederz fan conducts a homemade summoning ritual that spirits the band to perform live in their bedroom.

With early live appearances alongside contemporaries The Winter Passing and flirting. already notched up, the band have drawn early praise from the likes of CLASH, BBC Introducing, God Is In The TV Zine, Loud Women, Already Heard, For The Rabbits, Austin Town Hall, and a host of underground blogs and zines.

They will appear at this year’s Manchester Punk Festival in April 2019 with further live dates to be announced over the coming months.

Already boasting a fine pedigree of lo-fi underground hits between them, with their new project the trio have hit upon an instantly infectious brand of no-frills, melody-driven punk. Taking influence from the likes of The Breeders, Snail Mail, Dream Wife, Alvvays, Charly Bliss and Kississipi, their songs touch thoughtfully on the lived experiences of women and marginalised people.

faceplant was recorded and produced by Rich Mandell, who also plays guitar and sings alongsinde Phoebe in Happy Accidents, and mastered by Ryan Schwabe (Hop Along, Kississippi, Cayetana and more).

Debut EP faceplant is out now via Alcopop! Records