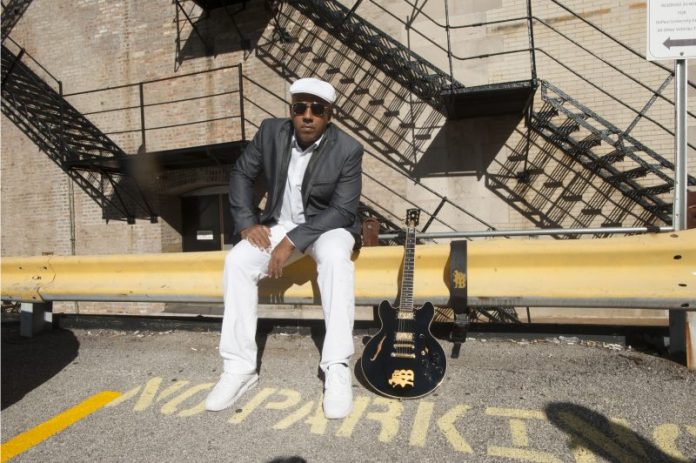 Chicago bluesman Ronnie Baker Brooks will be coming to the UK to play a one off show at Nell’s Jazz & Blues, London on Thursday 6th July following the release of his new album Times Have Changed(Provogue/Mascot Label Group) in January this year.

Talking about the show Brooks says; “This is my first tour with my own band in England and we are very excited to play the new songs to a new audience!” The band lines up with Daryl Coutts (Keyboards), Ari Seder (Bass), Maurice Jones (drums) and Ronnie Baker Brooks (guitar/lead vocals).

Born in Chicago, he started playing guitar around age six. At 19, he joined his father, the late-great Lonnie Brooks who by then had influenced some of the most well-known bluesman of our history: Jimmy Reed, the Fabulous Thunderbirds, Johnny Winter, and Junior Wells. For 12 years the two would tour together, putting Ronnie out front with Eric Clapton, B.B. King, Buddy Guy, and Koko Taylor.

For the album Brooks worked it with Steve Jordan, whose work runs from Keith Richards to Stevie Wonder, John Mayer and Eric Clapton. “I decided to go to Memphis and Nashville for the particular musicians and studios I wanted to engage,” Jordan explained.  “As it turns out, Ronnie had done a few of his previous recordings in Memphis, so he felt right at home.” Collaborating with Jordan represented a lesson in rhythm and blues history. Brooks refers to the director as “a walking encyclopedia of music detail and equipment”, a professor through which Brooks could take that next developmental step. “Once we got the ball rolling, my confidence went higher and higher”, he says. “I’m a better musician for this experience.”