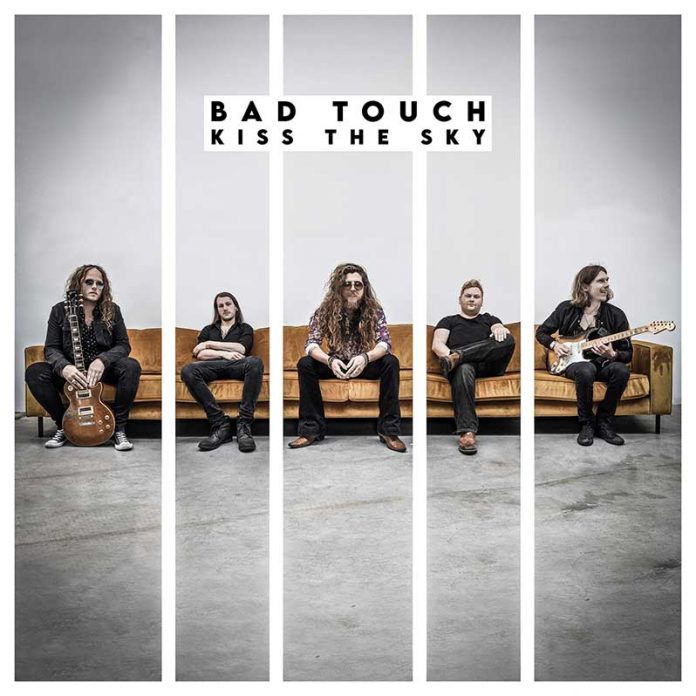 There’s a bit in “Bohemian Rhapsody” – the film – where Freddie Mercury is tardy for a meeting.

Mercury’s reply (and I hope he said it) was “I am a performer, darling, not a Swiss Train Conductor…..”

See, that’s exactly what I want from my rock stars. And Bad Touch are exactly that. “Kiss The Sky” was recorded at Rockfield Studios in Wales where Queen did “A Night At The Opera” and Oasis (who I like a lot more than I like Queen, I can’t lie) did “(What’s The Story) Morning Glory?” and whether its something in the water over there, they’ve never sounded bigger.

Actually, this review is essentially rendered pointless by “Come A Little Closer”. The opening three minutes eight seconds here, will say more than any of my words ever could.

Bad Touch are the masters of the opening tune, after all. “99%” from a couple of albums ago is one of the all-time great ones, but they’ve nailed it here again too. It’s not so much the music – the swaggering bluesy hard rock that takes up where Black Crowes “Kickin’ My Heart Around” left off, it’s the words: “All I ever wanted,” sings Stevie Westwood, “was to get you up on the floor and see you movin’”.

And that’s all Bad Touch have ever done. Ever. I remember the first time I saw them. They supported Bonafide, years ago. It was drizzling, a horrible late winter night. It wasn’t exactly packed, but they lit the place up. Stevie came and sat by me afterwards and he looked as happy as any man ever has.

That glow, that love for performing, its never left them. Never will. And they have a collection of songs worthy of that, again.

“I Get High” is simple and joyous, and Rob Glendenning’s riff for the “Let Go” which follows is much the same. “Here we go!” yells the singer at the start, as if its totally spontaneous, and the piano makes it Stones-esque. They must have liked this one, I saw them play it way before the album came out. Well they might.

“Strut” is sleazy. Happily so, proudly so, even. Because this is about escape. “Let the music make you feel right” feels like a key line here, but somehow more. Like a  decision that underpins the entire album. A choice that was made to help people forget their troubles. To entertain.

The reason for this is front and centre in the next one. “I’ve Got the Music In Me” sounds as joyous as anything might in 2020.

Even the ballads are uplifting. There’s a couple of them. “Can You Save Me” takes things down a kind of country road – and you can imagine if things had taken a different turn then Bad Touch are only a heartbeat away from being a southern rock band. The organ here is subtly brilliant.

The title track though moves up a gear. At some festival in the late afternoon in a packed tent this is going to sound incredible. A word too about the hooks here. BT have always had them by the load, here though, they’ve honed them to perfection.

That said though, there’s a real skill here too. “See You Again”, is a beautifully tender piece of work about the death of one of the fathers of the band. It’s said that the producer of the record, Nick Brine fought for it to be on the album. We can all be glad he got his way.

There’s strings on that one, and coupled with the funky tones of “Before I Die” – and lets be honest here, it could have been on the last Temperance Movement record with no problem at all – show the desire that Bad Touch have, and have always had, to keep growing, but on their own terms.

The musicianship of bands like this can get overlooked a little, but it shouldn’t. “Read all About It” is a real mastery of the craft, but it seems to me that its things like “Too Much Of A Good Thing” , which are what they born to do. If this soul flavoured stomper isn’t cemented into their live plans already then, I really know nothing.

They often end their albums with something a touch more epic, a bit Led Zep if you like, and they do that here too, with the soaring “Sun And The Moon” (although there is a bonus track on the CD, with the more pop overtones of “Something About Your Kiss” the type of thing that would have been a brilliant b-side in a bygone age.

Speaking of a bygone, outdated concept, here’s another. Light entertainment. Trying to make things fun for everyone is often derided as not “worthy” at a time when everything has to be edgy and challenging. “Kiss The Sky”, however, is about a dream. A thought that there might be a silver lining. Goodness knows, if you want to be furious you only have to turn on the news.

That night when we are allowed back to gigs, the first chord goes through the speaker stack and everything, maybe, might be alright again. That’s what this is for, that’s where this belongs. Bad Touch, you see, are performers and the music is in them. “Kiss The Sky” is your proof.