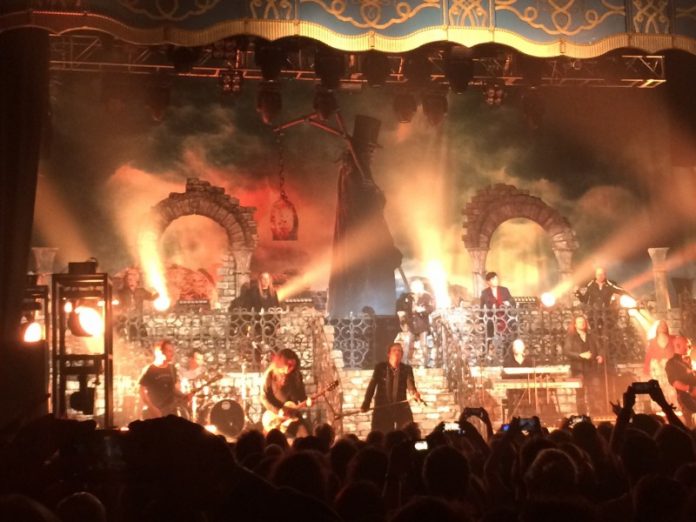 The power metal kings first ever “proper” show in England probably ends the battle for gig of the year already.

For a man who, by his own admission, has been shall we say….. enjoying the hospitality….. backstage, Eric Martin has pretty succinctly hit the nail on the head.

We are about two and a half hours into this – the first full production show by Tobias Sammet’s Avantasia on these shores – and Martin is merely just another of the long line of singers we’ve seen in this most spectacular of events, and in his rather hyper state, the ex Mr. Big man simply says: “Tobi just writes great songs.”

It seems odd to boil this down to the simplest thing, but strip away everything else and the songs of Avantasia, are quite simply the best power metal music there is. It’s just that “everything else” is what makes Avantasia so jaw-droppingly wonderful.

After all, what sort of man is it that fronts Edguy and thinks: “that’s all very well, but what if…..?” The answer is Tobias Sammet. And somewhere after the “what if’s” is the stage set that belongs in arenas, the three hour shows, the parade of vocalists tonight that includes Bob Catley of Magnum, Michael Kiske of Helloween, Ronnie Atkins of the Pretty Maids, Amanda Sommerville of Trillium, Jorn Lande and Herbie Langhans as well as Martin. Somewhere in those plans the labyrinth of complexity and bombast happened and yet, the music, the songs, the concepts, are so accessible and so superb that the sold out signs on the Forum are up and the queues are stretching around the venue.

We’d had a little taste of this, at Bloodstock three years ago, when for an hour and a half Sammet and his merry band proved beyond doubt that they were the kings of huge. Tonight, however is the first time that the UK – if you’ll permit the phrase – has been given the full length. None of the teasing, this is the 180 minute seeing to.

And what a show it is. Song after song, singer after singer, and a light show that would make Kiss blush. The choice of music does most of what you’d want it to and includes seven from the astonishing new “Ghostlights” album, released in January (“it did really well in the UK, we started thinking the album must be crap” giggles Tobi) including all its highlights, a brilliant “Draconian Love”, sung by Langhans, amongst them.

The set finds time to delve into the bands stellar past, such as “The Watchmakers Dream”, “The Scarecrow” and “The Wicked Symphony” and carry the incredibly enthusiastic audience with them them throughout. Probably because the level of musicianship on offer, not just from the parade of guests, but most particularly from the core members of the band like guitarist Sascha Paeth, who dovetails magnificently with Oliver Hartmann throughout, is stunning.

And if you are looking for a further reason why Avantasia are so different, it might just be the fact they don’t take themselves too seriously. It’s as if Sammet is saying “look, we know this is preposterous, but Christ it’s fun.” That’s surely why he and Kiske can stop for a mid-set row about who is the greatest heavy metal band out of Priest and Maiden like fans do everywhere (Tobi is right, by the way, he’s on the side of Eddie and the boys….).

The spectacle – and make no mistake that’s the right word for it, this is not a mere gig – ends with all the protagonists onstage to run through an immense medley of “Sign Of The Cross” and “Seven Angels” and as they take their bows Sammet says that if they ever do it again, they’ll be back here.

We may need the break to take it all in, because as they said themselves on the sleeve notes for the first album, Avantasia inhabit a world beyond human imagination. Appropriate, then, that this was, on every level possible, absolutely incredible.