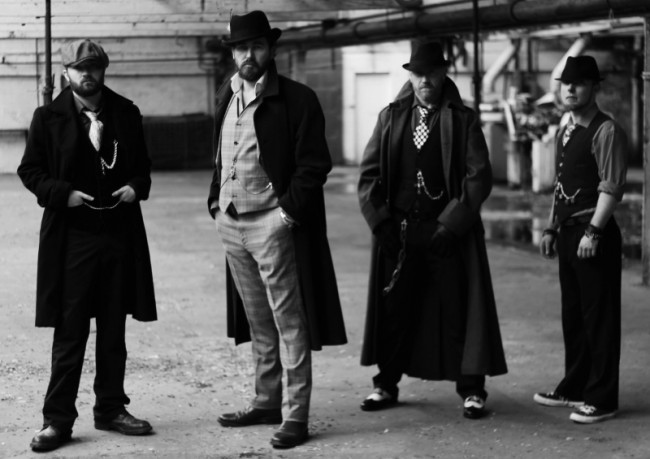 When metal and Peaky Blinders mix…..

From the dark alleys of Belfast, a new rock outfit has emerged. They call themselves The Irontown Diehards and they proclaim that they will be the coolest rock band you will see or hear this year.

That much may or may not be true… they do have a cool image, looking like something straight out of post WW1.

And what about the music?

With only one song recorded and released, an earworm of a number entitled ‘Step Inside’, there isn’t a great deal to go on, but it sure is enough to sate the appetite of a hungry rocker on the hunt for something new.

Imagine a hard rock band, with a drummer leaning more towards metal. The result is big! Drummer Gordon Gray doesn’t stop and having come from a thrash background it would make sense that he would be pushing this band forward from the backseat with bassist Mark McCallion in tow.

Guitarist Andrew Baxter, a well-known figure in the Northern Irish rock scene having starred in bands such as Last Known Addiction and Stormzone, has put together an exceptional set of riffs for ‘Step Inside’. Flowing effortlessly from passage to passage, even when at times straying outside the usual realms of rock but yet, at the same time, capturing that hard rock feel. There’s nothing disjointed here, and most definitely no run of the mill fillers.

And to top it off we’ve a vocalist with a mighty set of pipes telling you to ‘Step Inside’. Yet, another known figure on the Northern Irish circuit, coming from The Almighty Fallen, Philip Dixon hits the nail on the head with every note.
www.facebook.com/theirontowndiehards