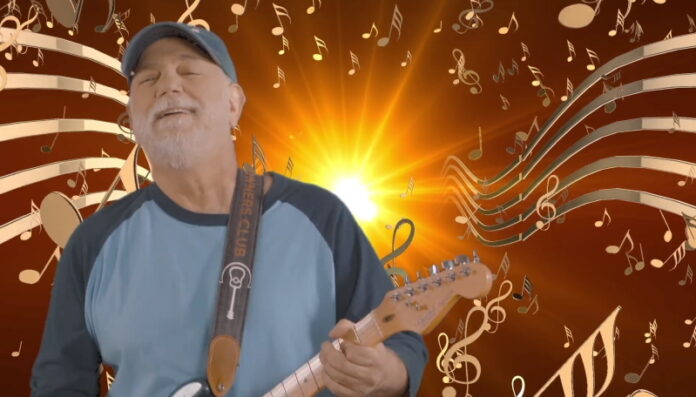 Last year Mike Tiano released his debut album “Creétisvan” which included guest appearances from Billy Sherwood, Randy George, and David Sancious. It has been well-received by critics and consumers alike.

Mike has now released the first music video from that album. “Triad” is a whimsical visualization where the lyrical content describes his personal musical journey that led to the album’s creation. The video is unique in that Mike pays tribute to some of his major musical influences, from early on with the Beach Boys and the Four Seasons, to more impactful artists that include the Beatles, the Grateful Dead, Jimi Hendrix, Led Zeppelin, Rush, and Yes. As Mike reveals, “It’s a fun and sometimes funny depiction of the song, with colorful graphics by Corina Bakke of Rokstar Studios. She successfully realized one idea which was to artistically depict some of my musical heroes, with me practically performing alongside artistic renderings of them.”

Mike has also released a short documentary “About Creétisvan from Mike Tiano” outlining his creative roots and calling out some of the folks who were key to the album’s creation. Mike acknowledges the talents of former Microsoft colleague and videographer Paul Racey for bringing this video to fruition. “Paul reviewed some footage I had previously filmed where I discussed the story behind the album, and by combining that with some key images he effectively created a concise but interesting and informational look at how the album came to be.”

In addition to his musical endeavors Mike continues to author high-visibility articles for Something Else! Reviews. He recently examined how Peter Jackson’s “Get Back” video achieved something miraculous for those who experienced the Beatles throughout the 1960s by restoring their ‘wonder’. In another piece Mike explored a major change that occurred for the title track of Yes’ masterwork “Close to the Edge” after its release fifty years ago, and includes quotes about that change from its participants.