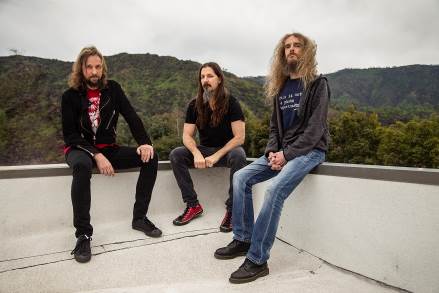 Instrumental trio The Aristocrats are to return to the UK and Ireland in June 2023 for a 7-date run of shows, including their biggest London show to date at O2 Shepherd’s Bush Empire. Not only will Guthrie Govan (Hans Zimmer, Asia, Steven Wilson), Bryan Beller (Joe Satriani, Dethklok, Steve Vai), and Marco Minneman (Plini, Joe Satriani, Steven Wilson) be playing their first UK and Irish shows in a number years, they will also be playing a selection of new as yet unreleased material, in addition to highlights and fan favourites.

In a joint statement about the tour, the band said, “It’s been far too long since our last shows in the U.K. and Europe, some of which were documented in our live album FREEZE! Live In Europe 2020 just before the big chill on live shows. So now it’s time for the DEFROST tour to bring us back, and we can’t wait to finally play shows again for our fans who have been waiting patiently for Aristocrats concerts to return!”

A collaborative affair from the 3 most sought after session musicians in rock; in the 10+ years The Aristocrats have been together, they have become a bastion of musicianship and the bottom line in technical mastery of their respective instruments. The trio have been releasing critically acclaimed albums, touring the world, and establishing themselves as one of the most musically original, refreshingly irreverent, and astoundingly entertaining instrumental rock-fusion acts on the planet.

A fusion of rock, jazz, metal, and any other genre that takes their fancy, the band have progressed from being musician’s musicians, to outright legends in the rock community. Anyone who’s witnessed their live musical high-wire act can attest that it is informed by the spirit of a true band, one whose improvisational soul allows for anything to happen onstage at any moment… including the occasional Frank-Zappa-influenced wink and nod at the audience.

Guthrie Govan, host of countless masterclasses and a frequent contributor to guitar magazines in the UK, has been known for over 30 years as the most proficient guitarist alive. Capable of turning his hand to any style of music set before him, he has most recently been on the road with Hans Zimmer, who personally sought Guthrie for his live band.

Bassist Bryan Beller is a familiar face for any instrumental rock fan – a veteran of nearly 30 years, he has been in demand to take the stage with legendary artists such as Joe Satriani, Steve Vai and Dweezil Zappa, whilst his studio work has seen him appear on albums with Satch, and frequently collaborate with Brendon Small’s Dethklok and Galaktikon.

Rounding out the Tres Caballeros is drummer Marco Minneman, whose technical mastery and innovative style has seen him play with the most extreme of death metal bands such as Necrophagist, to melodic masters Plini and Steven Wilson. As an educator, Marco has released 2 books about drumming, as well as being honoured by Modern Drummer magazine for being ‘instrumental’ in helping develop complex drumming techniques.