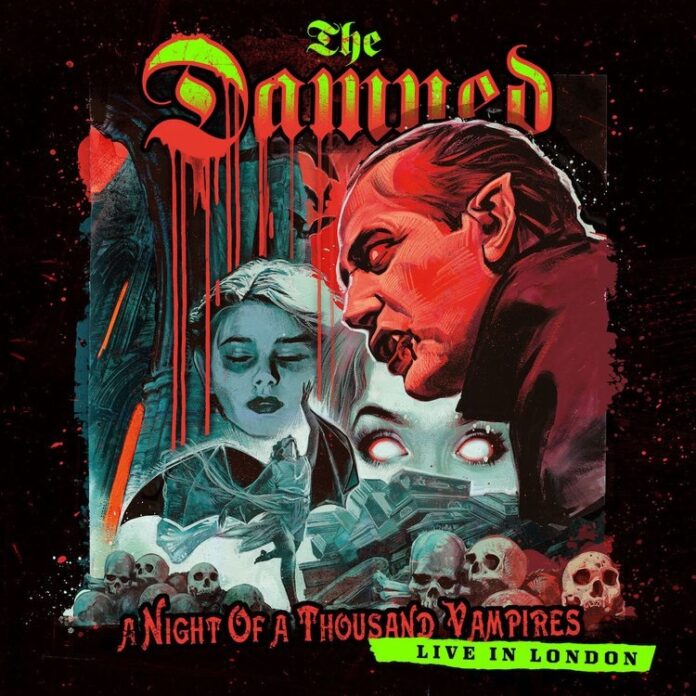 The long-awaited live album and film from The Damned, A Night Of A Thousand Vampires, out nowon earMUSIC, has hit Number 1 on the UK Official Music Video Chart and the UK Official Blu-Ray Chart. Watch ‘Neat Neat Neat / Bela Lugosi’s Dead’ clip from the film here.

Just in time for Hallowe’en, The Damned knocked The Beatles’ Get Back off the top spot in both charts. A Night Of A Thousand Vampires was a night to remember for those of us amongst the living… and the undead! An evening of shock, awe and a fierce live rampage – watch here.

The film premiered in London last week at FrightFest to a sold-out audience of punk and horror fans alike. The event was also attended by Vampire film legend Caroline Munro, Hammer Films actress and star of Dracula A.D.1972 and Captain Kronos: Vampire Hunter.

A Night Of A Thousand Vampires takes audiences back to October 28th 2019, when David Vanian, Captain Sensible, Paul Gray and Monty Oxymoron of The Damned took the stage at London’s prestigious Palladium Theatre for a very special immersive musical and theatrical experience – performing songs from The Damned’s 40-year rich catalogue.

A true event from showmen supreme, it was a historic night in the history of a storied band and a special evening for fans and band alike. It was also a fond farewell for drummer Pinch, his final gig with the band after 20 years.

A Night Of A Thousand Vampires teams the UK’s first punk band with The Hammer House of Horror and the cast of The Circus of Horrors. With the band and audience in full vampire attire, David Vanian transforms from Dracula into Nosferatu, ‘Neat Neat Neat’ morphs into ‘Bela Lugosi’s Dead’, and fire-eaters and trapeze artists dazzle to a set that includes classics such as ‘Wait For the Blackout’ and rare performances of appropriate covers like ‘People Are Strange’ and ‘Eloise’.

A Night Of A Thousand Vampires Album Tracklisting:

Beaty Of The Beast

Wait For The Blackout

Standing On The Edge Of Tomorrow

Under The Floor Again

I Just Can’t Be Happy Today

Black Is The Night