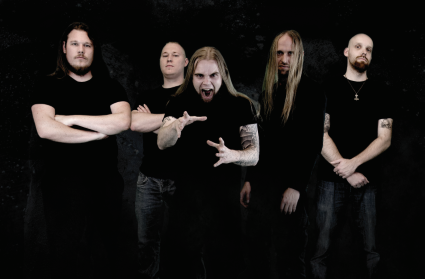 Netherlands based death metal act, Apophys, boasts members of renowned Dutch bands including: God Dethroned, Prostitute Disfigurement, Detonation and Toxocara. The band formed in 2012 and have since been surgically carving their path in the modern death metal scene. Apophys prioritizes song structure above technicality, and strives to become part of the new standard in death metal. Response froms fans to the 2013 demo material was completely overwhelming and with expectations quite high already for this young band, they sit poised to finally release their debut full length world wide on Metal Blade Records.

“Prime Incursion” will take you on an epic venture across the known universe and beyond. With themes ranging from transcendental travel, rapid evolutionary progression, and global epidemics, to artificial intelligence in an all out war with their maker. All inspired by modern art, media, and science. “Prime Incursion” contains nine songs of furious, sci-fi tinged death metal. The album was mixed by Kevin Quilligan and mastered by Stefano Morabito at 16th Cellar Studio (Fleshgod Apocalypse, House of Penance).

Singer Kevin Quilligan said: “The thought of our planet floating through a galactic minefield makes me think about how frail our existence really is. And where some might consider this to be a negative and demotivating thought; I used this realisation to create something truly apocalyptic. A full self sufficient Death Metal machine in which I as a person am frail, but as part of this more powerful than ever.  This is Apophys. We are coming.”

The album is released via Metal Blade on 7 April 2015