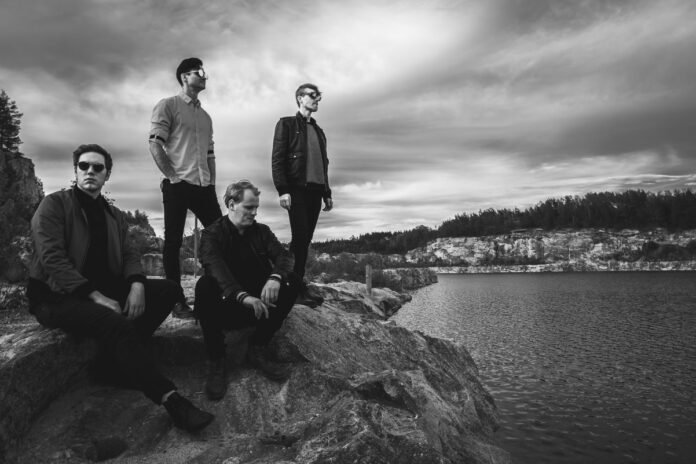 Stockholm based A Projection formed in 2013 as a post-punk outfit influenced by The Cure, Joy Division/New Order, Sisters of Mercy, Interpol and Editors, although electronic godheads such as Kraftwerk, Depeche Mode, D.A.F. and compatriots The Knife were also important to their original musical vision.

With a sound that spilt over into the related indie and goth genres, the first three albums by the band – ‘Exit’ [2015], ‘Framework’ [2017] and ‘Section’ [2019] – developed from minimalist beginnings into a more readily accessible sound, yet remained within the framework of a strict post-punk aesthetic and attitude.

An enforced break due to the pandemic resulted in two line-up changes, including the former bassist becoming lead vocalist, while the group had recently left the indie oriented Tapete label to join the more electronically leaning Metropolis roster for the release of ‘Section’. With that had come a shift towards a more synthesizer based style with influences from the 80s, contemporary darkwave and current chart hits.

The group’s recent singles ‘Darwin’s Eden’, ‘No Control’, ‘Careless’ and ‘Anywhere’ (the latter has a distinct mid-80s electro-pop vibe) have all gained attention and expectations are high for their brand new album, ‘In A Different Light’, which is released on 18th November and on which all four singles are included. The album also includes contributions from fellow Swede Henrik Linder of Dirty Loops and Sarah Boom of the Brussels-based Turquoise.