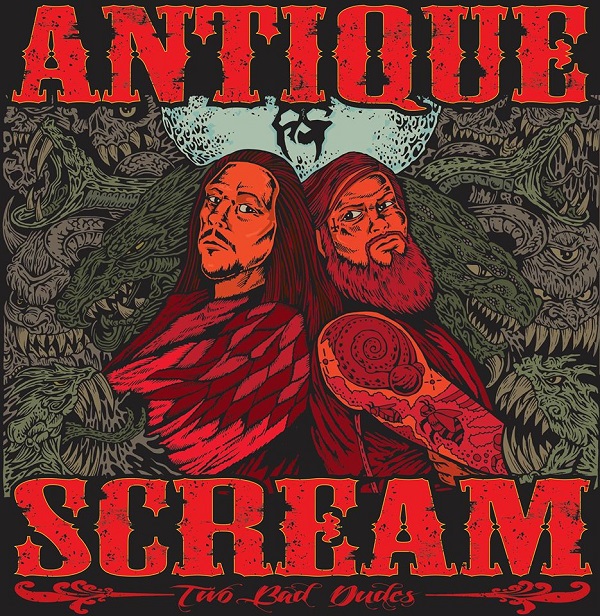 MVM bags an exclusive from our friends at Self Destructo Records

Antique Scream have been touring incessently, with a variety of members, since 2007. The years have harnessed Rutledge’s vocals and fuzzed out blues guitar playing to a finely honed edge. With Fees’ addition to percussion, we see a two piece of immense sound and solidarity, either dragging you back to the 1930’s blues scene in southern Louisiana, and alternatively pushing you into the first time you witnessed the frightening power of your first solo drudged out metal show.
“Two Bad Dudes” is the full length that 2011’s “The Chronicles of Dirty Dick” expands upon. This release is designed to be listened to as a five part epic storyline, following the distorted adventures throughout an imaginary landscape of film vixens, along with the Burroughs and Leary influenced mindset, leading the listener inexorably through the side A. Side B begins with an orchestra piece of percussion which
leads the listener into the ketamine and morphine addled brain that Antique Scream fully expects you to be in during this release.
When listening to this record, there is the preposterous idea that Antique Scream is merely a band that records a record, and takes it easy after that. These two are on a constant touring loop. Being located alternatively in Seattle, Washington, and Phoenix, Arizona, the west coast loop into the mountain states is a natural assumption. With the release of “The Chronicles of Dirty Dick,” the two piece has been drudging their long haired, denim and leather clad fans out of the basements of destitution and into the dens of vice and sin that anyone would expect and with large numbers.

Check out the title track, which we are streaming exclusively – and our review of the record will be on in the next fortnight.