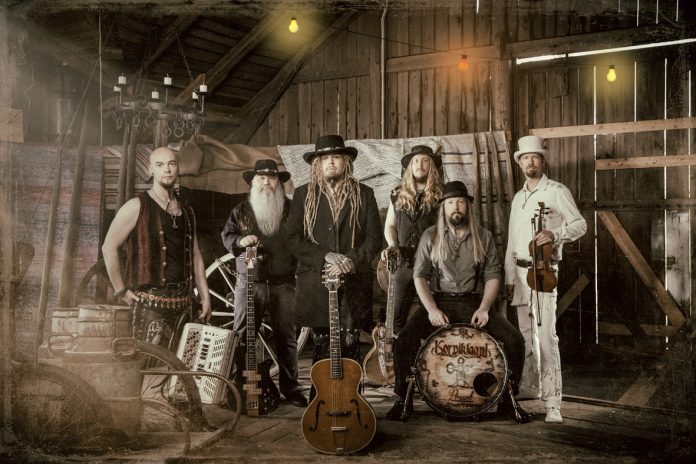 Finnish Folk Metal Superstars KORPIKLAANI are about to kick off an extensive run of dates that will see them travelling across the globe throughout 2019. Kicking off with an 8 date Finnish tour on which they’ll be joined on stage by a brass section from Lahti Sinfonia and with support from WALTARI, TROLLFEST and PROFANE OMEN, the band will then hit the road across Europe alongside TURISAS and TROLLFEST. To celebrate their epic trek, KORPIKLAANI has launched another track from their Beer Beer album, which will be included exclusively in the forthcoming Kulkija [Tour Edition], out February 15, 2019 via Nuclear Blast. Today’s version features guest vocals by Vesku of Finnish punk rock band KLAMYDIA. Check it out here:

Just recently, Pyynikin Craft Brewery unveiled a tasty KORPIKLAANI lager and to celebrate this occasion, the band will release a special tour edition of their new album Kulkija (Wanderer), which doesn’t only include the regular songs, but also a bonus CD titled ‘Beer Beer’. This disk, only available in the physical package, includes 14 versions of KORPIKLAANI’s iconic song ‘Beer Beer’, graced by the likes of Christopher Bowes (ALESTORM), Steve ‘Zetro’ Souza (EXODUS), Andreas “Gerre” Geremia (TANKARD), Jesper Anastasiadis (TURISAS), TROLLFEST, HEIDEVOLK and many more of their friends.

The more ethereal band Jonne, led by the KORPIKLAANI lead vocalist Jonne Järvelä, will unveil a single trilogy started by the single ‘Kaiho’ that was released in November and also featured WALTARI vocalist Kärtsy Hatakka. The trilogy will be completed with the releases of ‘Tuhka’ in February and ‘Autere’ in March. Both of these songs will also feature vocalist Riikka Jaakkola, familiar from the series Voice Of Finland. All three songs deal with the emotions of death and longing and will be available for streaming and through other digital service channels.

With 14 tracks and a total running time of over 71 minutes, Kulkija is the group’s longest album to date. Working with producer Janne Saksa for the first time, the album was recorded at Petrax Studio (Hollola, FIN) and mixed at Sound Supreme Studios (Hämeenlinna, FIN). Mastering duties were handled by renowned engineer Svante Forsbäck (RAMMSTEIN etc.). The cover was designed by Jan Yrlund (BATTLE BEAST, MANOWAR etc.), who has already created several artworks for previous albums and singles for the band.