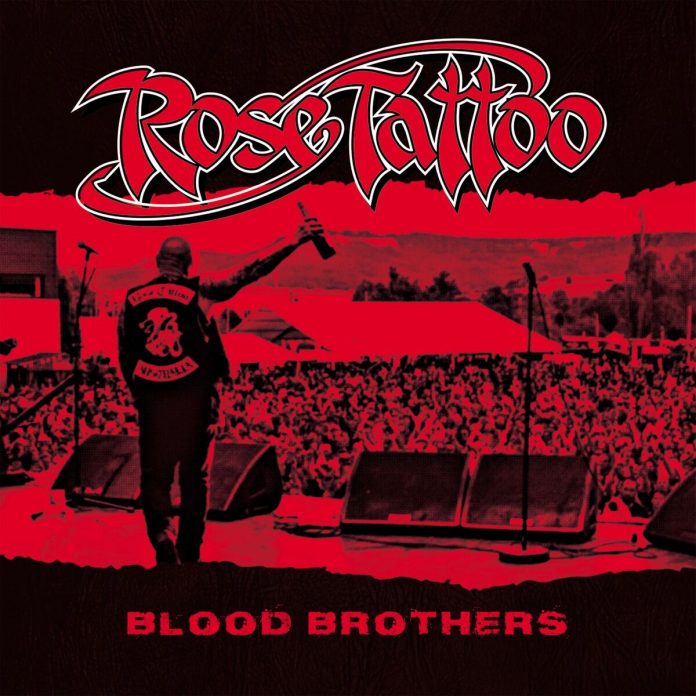 The original rock ‘n roll outlaws, Rose Tattoo will be kicking off their Blood Brothers 2018 tour at the end of this month.

To celebrate the tour, Golden Robot Records are reissuing the bands classic 2007 album, Blood Brothers throughout Europe on 18th May, 23rd March for Australia only. The re-issue features killer live versions of some of the albums finest tracks, including Man About Town, Black Eyed Bruiser, Once In A Lifetime, Sweat Meat, Standover Man and Nothing To Lose recorded live in all their glory and captured on disc. This is the Tats at their best. Raw, rough and ready for a fight, but also tight as a fist and sounding bigger than ever.

Mixing their trademark riffage with modern rock grooves and lyrical statements of intent, Blood Brothers pays tribute to the many members of the band that are no longer with us. Rose Tattoo’s iconic, street smart blues rock has captured the heart and soul of rock fans all around the world for over 40 years now and shows no signs of stopping.

The Blood Brothers 2018 line-up features some of the finest rock musicians this country has ever produced. Mark Evans of AC/DC on bass, Angels & Skyhooks axeman Bob Spencer, Aussie Crawl’s John ‘Watto’ Watson up the back and the Pete Well’s endorsed Dai Pritchard on slide guitar, and of course, Rose Tattoo wouldn’t exist without its quintessential front man, the one and only Angry Anderson. Blood Brothers is a fine example of what you can expect when Angry and the boys hit the road. Adrenalin fuelled, high octane Aussie rawk at its undiluted best.

The first 100 pre-orders of the Blood Brothers reissue via JB Hi Fi are signed by Angry. Get in quick as they are moving fast!