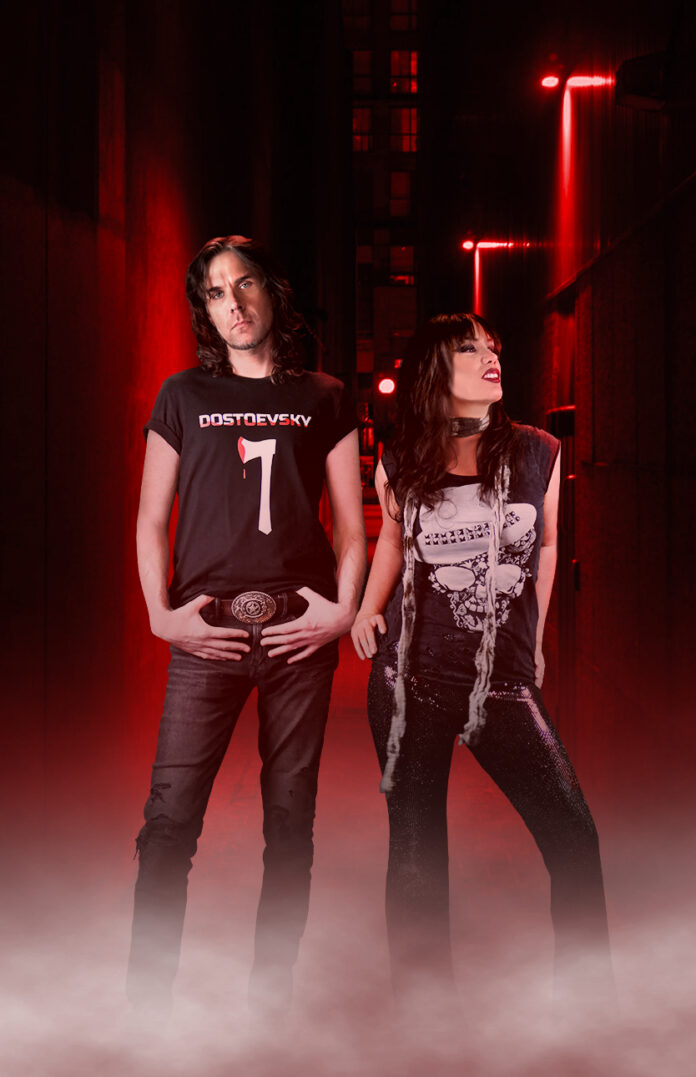 The Bloody Nerve Continue the Episodic Roll-Out of Their Hard-hitting Album, ‘All Blood, No Treasure’, Opening Its Second Act by Premiering the Title Track as a Lyric Video & Announcing the Official 3-track EP

Curtains are rising on Act II of The Bloody Nerve’s storm-strength, episodically released rock-rich, powerhouse concept album ‘All Blood, No Treasure’. The band premiere the brand-new lyric video for the album’s title track, Episode 4 ‘All Blood, No Treasure’ on Wednesday 16th February. Episodes 5 and 6 from Act II will be released soon, followed by the full Act II EP on 25th March on digital platforms and a limited-edition CD.

Check out the lyric video  https://www.youtube.com/watch?v=ZFm1gIsvS1E

The Bloody Nerve combines the talents of singer/guitarist Stacey Blood and vocalist Laurie Ann Layne. They may be based in Nashville, but few would guess it from this rock duo’s tsunami of sound, energy, and hard-hitting, razor-sharp lyrics.

Each single release carries its own standalone feel and meaning, but the individual tracks build up a broader, interconnected, work of art, with a message that both overarches the parts and is woven through them.

Episode 4 opens Act II of the album with a bang and a song of iconoclasm and a lyric video that presents it as a game. In the words of the chorus: “It’s alright, our case is tight/I tear it down for pleasure/The future’s bright, so hit the lights/It’s all blood, no treasure, baby”

“Episode 4 is like the manifesto of sorts, like there’s no hiding the dreadful reality anymore,” explains Stacey Blood, “It’s brutal and sad all at the same time.  Deep down that’s what we’re all feeling, whether we admit it or not, and no matter our political priors. We feel like prey.”

Laurie Ann Layne puts the latest release in the context of the album’s second act: “Act II is called ‘Reckoning’, because we always end up here,” says Laurie, “We can’t make up our rules, as it turns out.  To protect that machine, things get more forceful and more ridiculous until it implodes.”

The lyric video for Episode 4 looks like an old-school video game, opening with a jaunty 8-bit sounding jingle heralding a tank, flying The Bloody Nerve’s flag, rolling across the playfield, firing at statues, icons of Western culture, past and present, racking up points over the levels. Watch for the special power-up!

“The latest installment from these Nashville mavericks’ album – the juicily named All Blood, No Treasure – is a gnarly mix of punkoid fire, Dead Weather-esque rock and social disenchantment,” proclaimed Classic Rock, who made the band’s Act 1 finale, ‘Roads’, their Track of the Week winner.

“They mix it up rather well, grunge here, southern rock there, pop punk over in the corner,” said Powerplay Magazine, awarding the Act 1 EP 9/10, “It has the audacity of youth. And The Bloody Nerve to wink at us while they do it.”

Check out Act II, Episode 4 of The Bloody Nerve’s latest release, whether you take in the one episode or binge on Act 1 as well: the series opener ‘A Million Arms’, followed by ‘What’s It Say? (About You)’ and Act 1’s finale ‘Roads’. Meanwhile, don’t turn that dial – further episodes are on the way as the album unfolds, so watch for the next two Episodes in this Act, coming soon!

As Stacey told journalist Neil Mach, “It will be a slow-burner (lots of mileage), and like all good television series, there will be lots of cliff-hangers along the way.”