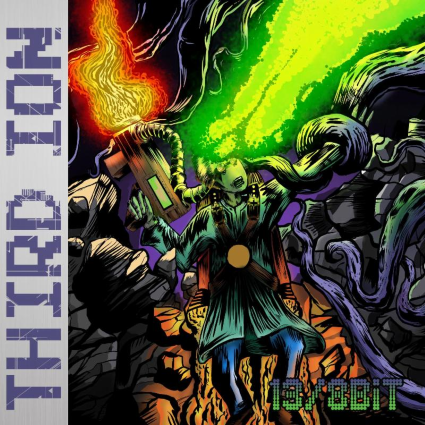 Prog metal outfit THIRD ION, featuring former members of THE DEVIN TOWNSEND BAND and INTO ETERNITY, will release debut album 13/8Bit May 25 on Glasstone Records. 13/8Bit will be available in CD format through the label and in digital format on iTunes. Album artwork comes courtesy of Harley K at Necrographix.

THIRD ION is the product of a mutual love of prog, video games, and science. The debut album contains eight songs, including the title track which is written entirely in 13/8 time signature. 8-Bit musical renditions of every song will be released as well, to pay homage to their 1980s classic gaming inspirations.

While musically THIRD ION are very metal at the heart, the songs are non-aggressive vocally. This creates a unique contrast of darkness, depth, and technically a very progressive heavy sound.  THIRD ION are progressive, no only in the sense of odd time meters, but also in lyrical subject matter, covering subjects from physics to metalphysics. THIRD ION fully embraces technology in the writing and recording of their sound, while maintain and nourishing an organic aspect.