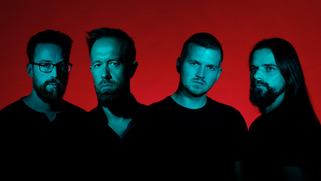 “Parasites has been going down so well as a live track it had to be released as a single. We played it every night on the recent tour with The Vintage Caravan and it really seemed to capture the attention of the crowds and make an impact. The song shows a more progressive side to Empyre, as it shifts through atmospheric and darkly angelic passages into riffs that are more akin to metal than what we are commonly known for. We love it for being dark, even by our standards.”

Empyre will release their new album Relentlesson 31st March via Kscope, having signed to the label earlier this year, joining the likes of TesseracT, The Pineapple Thief and Envy of None.

WATCH THE VIDEO FOR ‘PARASITES’ HERE

Widely regarded as one of the hardest working bands of the past few years, Relentless was recorded between pandemic lockdowns and during their previous album’s (The Other Side) release cycle. Once again they encamped at Parlour Recording Studio, Kettering for recording with Neil Haynes, before handing mixing duties to Chris Clancy at Audioworks (Machine Head, Those Damn Crows, Massive Wagons) – who has magnified the band’s dark, emotional, rock sound with an elevated deep richness.

‘We write arena rock and playing arena stages is something we aim for. I won’t be happy until I’m standing on that arena stage’, Henrik adds. With regular comparisons to the likes of Alter Bridge and Soundgarden mutated with Dire Straits and Muse, it’s clear that Empyre’s music was written with the big stage in mind.

Other tracks such as ‘Hit and Run’, ‘Waking Light’ and recent single ‘Relentless‘ capture the band’s more commercial side, featuring a warm, enveloping sound, while ‘Forget Me’ showcases the album’s emotive edge, as the haunting, delicate ballad builds to a euphoric ending, a song that would be at home on in any arena.

Since their debut album Self Aware in 2019, Empyre have won Classic Rock Magazine‘s “Track Of The Week” on three separate occasions alongside a ‘High Hopes’ feature, while Kerrang! described their sound as “slick, vast and like the music was written with the help of an architectural blueprint for an arena”. Planet Rock heralded the band as ‘Ones to Watch’, playlisting the tracks ‘New Republic‘ (https://youtu.be/wfIH4uPMKIg ) and ‘My Bad’ and on the strength of the 2020 Winter’s End performance immediately booked them for the Planet Rockstock 2021 main stage.

Empyre have also been one of very few rock acts to be featured on ‘Whispering’ Bob Harris’ “Under The Apple Tree” Sessions.

Aside from their high aspirations and determination Empyre are also known for a darkly self-deprecating sense of humour and have proved they have what it takes to stand out from the crowd by delivering an engaging, if unsettling mix of melancholy, hope, and hopelessness, often within the same song.

Relentless will be released on the following formats, with additional bundles and items available exclusively through the Eyesore Merch band store – all are available to pre-order here https://empyre.lnk.to/Relentless

All pre-orders via the Eyesore Merch band store will receive a hand-signed photo and an exclusive free download of Empyre’s unreleased cover of the David Guetta & Sia track Titanium.

Items available bundled with the various formats include:

·       A special limited edition Boxed version, designed and hand-treated by the band. Including two tickets for the unique opportunity to join the band at the album listening party event in advance of the album release, plus a USB stick with exclusive album content and more.

Empyre are already a firm favourite on the UK live scene, and having had a busy summer playing festivals, the band recently completed a UK tour supporting Vintage Caravan. Empyre will also open for Gun in London on 1st December and at the legendary Glasgow Barrowland on 10th December.

2023 will see the band performing at Steelhouse Festival, Wales, in July, alongside the likes of Airbourne, Blue Pills and The Answer.

Before then though Empyre will host a couple of very special events prior to the Relentless album launch on Saturday 11th March, in their home town of Northampton. Already sold out, just 24 hours after it was announced, they hold an album listening party and Q & A session at Northampton Filmhouse. Followed in the evening by a live performance of the album at The Black Prince venue which is on course to follow suit. So be quick to grab tickets whilst you can!