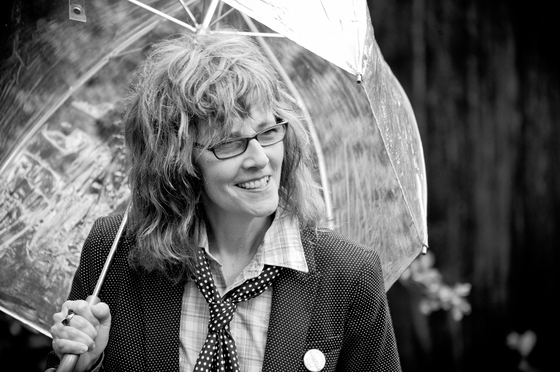 If there were an East Nashville Music Hall of Fame, Amelia White would already be in it. The now-famous scene was in its formative days when White arrived from Boston in the early 2000s and became a fixture at the Family Wash. She’s been a leading light in America’s most musical zip code ever since, even as she’s developed a reputation in the rest of the U.S. and Europe as a first-rate songwriter. She helped define and refine the core folk-rock sound of Americana, yet her band’s energetic pulse never outshines her carefully wrought lyrics. She’s a poet who’s been compared to more famous songwriters for years; now, it would be more appropriate to use her as a benchmark.

White’s seventh album, Rhythm of the Rain, due out January 25, 2019, is a volume of ruminations and short stories written largely during a tour in the U.K. in 2016. There, at a distance and with a sense of helplessness, she watched America’s political system and her values attacked from within. Then the project was recorded by East Nashville sonic maestro Dave Coleman (The Coal Men) in an emotionally wrenching four days between White losing her mother and marrying her partner. Roots music is a journal of love and loss, and Rhythm of the Rain couldn’t be a more potent dispatch.

“As a songwriter, I feel obliged to tell the stories that are coming through in the air to me in my world whether it’s personal or political or both. That can be hard,” White says. “The antenna is always on. Man, you’ve got to feel a lot. It’s a heavy load sometimes.”

She’s shared shows with the likes of Brandy Clark, Asleep at the Wheel, John Prine, and Justin Townes Earle, as well as performed for a handful of folks in unknown cafes. “There was a point in my career where I realized you have to go out and knock on doors with your songs,” she allows. “They need to be sung for people and that means a relentless tour schedule. If I were a trucker I’d be rich.”

The 12-song collection opens with a sunny snap of drums and a slurry steel-like guitar figure, in keeping with the electric punch that’s always been a key part of White’s sound. Then “Little Cloud Over Little Rock” zooms in on a scene in a bar in Middle America, where White lets telling details evoke a situation full of mixed emotions, of resignation and perseverance. White has always gleaned song inspiration through talking with people in the cities she visits. “I find that if I truly open up on stage, people come and want to tell me about the skeletons in their closet.”

The artist balances bitterness and grace in the farewell song “Mother of Mine.” She says that after her mother’s passing, “I wrote a letter to her — a really honest letter, and of course a song came about.”

“She wanted me to be ‘a classic little girl’ and that’s not what she got. I could never say these words to her face, and now she’ll hate me from the grave,” White adds with a wistful laugh.

In a timely tune, White gives a sexist music industry the back of her hand in “Free Advice,” a song that came about after repeated DJs asked her about her age, “Would you ask Bob Dylan that?” In “Said It Like a King” (written with Lori McKenna) personal, religious and political bullies are exposed. “True or Not” (written post Women’s March on Washington) transmutes the despair of the worlds unfairness into a “peaceful battle cry.”

Though she lives in one of those famous blue islands in a red state, local evangelical bigotry was enough to prompt “How It Feels” as a celebration and affirmation of her marriage. She notes, “It’s tough growing up gay in the South — in the past year it feels like they are trying to shove us back in the closet.”

The title track has its own distinct restraint, musically and emotionally. “Rhythm of the Rain” is most distinctly set in London and most intimately tied to the slipping away feeling of the November 2016 shock. Instead of defiance, here, she tries self-comfort, curling up, breathing and tuning out a storm of hate with the white noise of a downpour.

Amelia White doesn’t chase opportunities. She chases songs and gives her entire focus to the listeners and fans who show up, year after year, to commune with her music.

Her songs and co-writes have been recorded by some of the great names of Americana music: Anne McCue, Julie Christensen, Wild Ponies, and Tony Furtado.

“When faced with whether to go out in Nashville and schmooze, or take a walk and start a song in my head I’d always choose the SONG,”she says. “And sometimes I feel that I pay for that.”

Yet we listeners are the ones getting something of value.