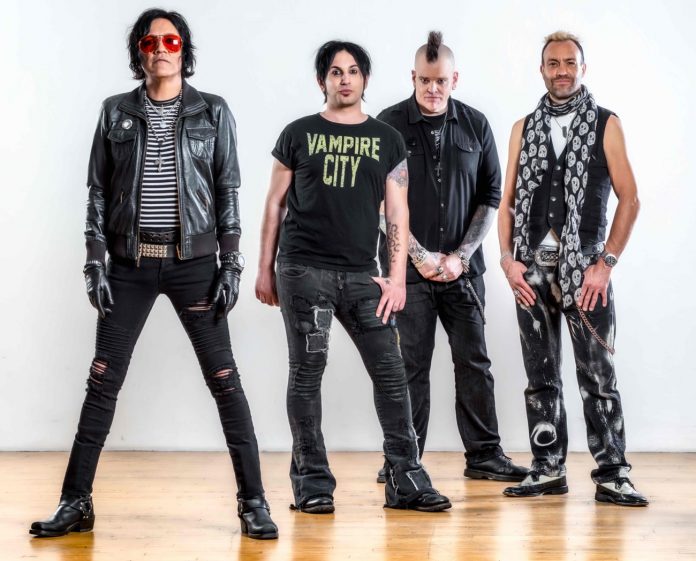 The new album by BulletBoys, ‘From Out Of The Skies’, is set for release on 23rd March via Frontiers, preceded by a ten date UK tour (see full itinerary below).

The first single from the record, ‘D-Evil’, is already available and features guest vocals from Jesse Hughes of Eagles of Death Metal. BulletBoys vocalist, guitarist and founding member Marq Torien says of the song: “Jesse and I had an instant bond when we met and he did an outstanding job on the song, with his vocals a welcome contribution.“

‘D-Evil’ was the no. 1 song on the UK’s Hard Rock Hell Radio station in early February.

The album was recorded at the Foo Fighters’ Studio 606. “Writing and recording ‘From Out Of The Skies’

magical,” continues Torien. “Dave Grohl‘s music got me through a very difficult time, so from day one

I knew that we were in the right home to record. I was privileged enough to use one of Dave’s acoustic

guitars to record with, along with a hand picked drum set by Taylor Hawkins. I appreciate the opportunity

Main support on the tour comes from Enuff Z’nuff.

BulletBoys began as a collection of talented musicians from high profile bands like King Kobra and Ratt.

most other bands would have killed for, they swiftly captured the attention of music fans around the world,

while frontman Marq Torien emerged as one of the most underrated vocalists of the era.

Unlike many other glam rockers of the day, BulletBoys fused hard rock and blues rather than being purely

hair metal based. Having been compared to the likes of Aerosmith, AC/DC and especially Van Halen,

record labels flocked to them and the band soon gained their first major label contract. Over the course

self titled debut and its follow-up ‘Freakshow’, Torien has kept his band relevant and they remain in heavy

rotation on rock and metal radio and TV channels worldwide.