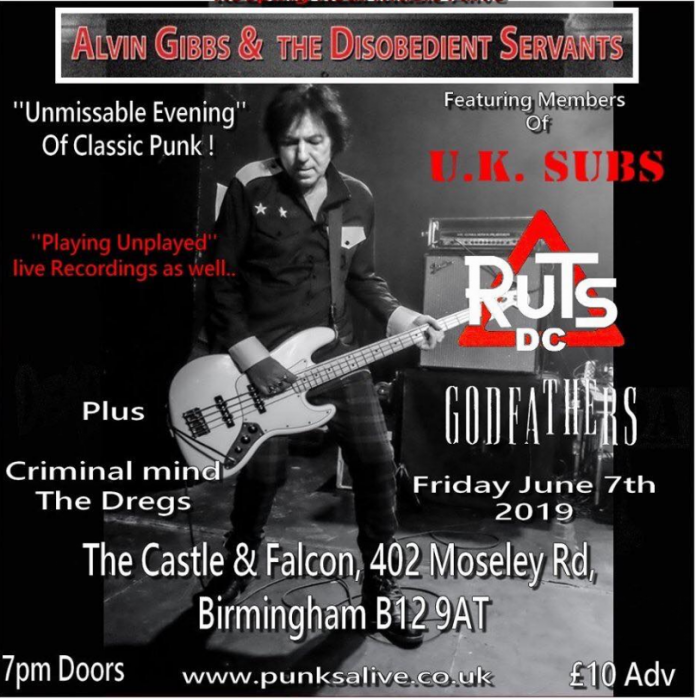 I can’t say too much about The Dregs because I play in them and as they say any self- praise would be no praise at all. There are some videos on our facebook page so people can make up their own minds.

Bristol 4 piece Criminal Mind hit the stage dressed in bandannas and with an attitude normally associated with the headline act. They produce a blend of hardcore punk rock that also has some melody and harmony. There are many influences in this band from punk, metal, celtic and ska which makes the music move, clearly aided by their obvious technical ability and the love of what they do.

They have been around for over a decade and have come on loads even since the Brum Punx Picnic in 2016 and they were great then. Opening track ‘Life to Defend’, from their album of the same name released in 2015 is a great way to start the show with melodic guitar lines, moving bass and a catchy chorus. Next, ‘Cannonade’ and ‘Blood On The Cobbles’ fly out of the traps and give us a flavour of the whole show. ‘Cannonade’ is a classic track with quickfire drums and a killer guitar solo.

They trade lyrics and guitar licks, with ease with bass lines akin to Rancid and the like, speedy and glistening with melodic undertones. ‘Dirty Tricks’ from album ‘Life To Defend’ is a great rocker with a feel similar to heavy tracks by the likes of the Misfits and Bad Religion.

They continue to hit us with uptempo numbers in ‘Keep Your Mouth Shut’, ‘No Social Culture’, ‘Over Opinionated’ and ‘Rebel Sounds’ and their breakneck playing in reminiscent of hardcore outfits such as Minor Threat, Bad Brains and Black Flag. Their vocal harmonies and their habit of switching vocalists was great as it gives an added dimension to their sound which changes at colossal pace. Their sound to me is somewhere between Rancid, Operation Ivy, The Decedents, Agnostic Front and Pennywise. Although at one point they were so melodic it was bordering on early Bruce Springsteen.

They closed their set with ‘The Way Out’. ‘Night in Hell’ and an excellent version of ‘Remember Your Name’ from their 2012 debut album and left the stage their onslaught complete. Great set.

Alvin Gibbs and the Disobedient Servants

The UK Subs bass player recently released his latest solo album ‘Your Disobedient Servant’ and is touring to promote it with his band of disobedient servants, namely Jamie Oliver, UK Subs drummer and Leigh Heggarty from Ruts DC. Throughout the tour they are being joined by guest guitarists and tonight sees Godfathers guitarist Steve Crittall.

With a band of punk rock royalty and with an album that Vive Le Rock gave 8/10 this was always going to be a great show.

‘Arterial Pressure ‘ a tribute to Joey Ramone the opening track from the new album gets the show off to a punk rock and roll onslaught and Jamie keeps up the pressure going straight into ‘Ghost Train’. These new tracks have a great feel about them and are the kind of rock and roll punk I grew up on. The playing is excellent as you would imagine with complex bass and guitar lines and solos that are mesmerising.

Alvin reminds us of his time with Iggy Pop and throws in wonderful versions of ‘Down on the Street’ and ‘1969’ in honour of his former leader which has those old enough to have been around then leaping around at the front.

Alvin weaves in UK Subs tunes that we never normally hear in UK Subs sets but given they have been through the whole alphabet in album names this is hardly surprising.  These are subs songs Alvin sings on albums and no doubt wrote. Played here they have the added kick of two of the best punk/post punk guitarists around and Jamie’s tight and explosive drumming. Tracks like ‘Bordeaux Red’ from Yellow Leader with it’s great lyrics and ‘Drag Me Down’ are excellent versions as are ‘Stare At the Sun’, Living Dead’ and ‘Black Power Salute’.

But this is not about the Subs nor is it a Subs/Ruts love in, this is about Alvin Gibbs and the Disobedient Servants showcasing new material whilst acknowledging some of their greatest influences. The new songs have clever arrangements and lyrics informed by Alvin’s 40 plus years in the music business. ‘Dumb’, ‘Camdent Town Gigolo’ , ‘Clumsy Fingers’, ‘Heaven And The Angels‘ ‘Polemic’ and ‘I’m Not Crying Now’ all showcase Gibbs skill as a song writer and musician proving that you don’t really have to play at break neck speed to write a great punk tune.

We are treated to a version of ‘In A Rut’ with Leigh Heggarty on lead vocal which meanders into the Subs ‘Warhead’ half way through and back to ‘In A Rut’ again to close.

This was a great end to a great show put on by hard working local promoter Adam Ward at this great venue.

Apparently, Steve Crittal played this show with no rehearsal which if you’d seen the show as I did makes it even more impressive. You can catch them all at Rebellion as Alvin Gibbs and the Disobedient Servants and in their respective bands.

Thanks to Leigh Heggarty for the set list see you all again soon.