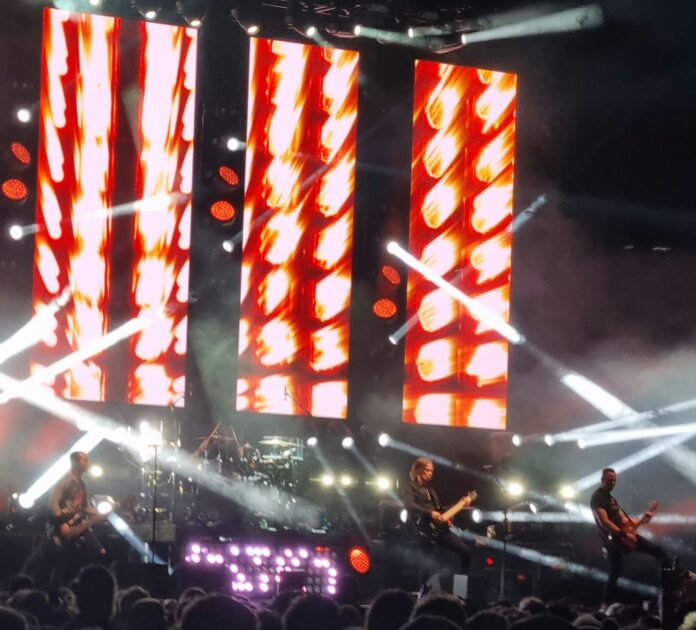 “Mammoth WVH” is the sound of someone finding their own voice and with it, their place in the world.” I wrote those words back in 2021 when reviewing the debut record from Mammoth WVH. It’s fair to say that anticipation was high for the first ever midlands outing from the band. That’s a fair word for it too, because live they are a proper band as opposed to a solo outing for Wolf Van Halen (and credit to him for not trading on the name and going out on his own), as had originally been the case.

He’s a brilliant guitarist and musician, is Wolf, as well as being an engaging character, and their 35 minutes is littered with mighty fine hard rock. “Mr Ed” is perhaps the pick of them, but in truth they are all such high standard. “Epiphany”, is the first song they ever wrote, likewise, and the mid-paced “Think It Over”, which Wolf says was his dads favourite Mammoth song, is delivered with a real emotion.

The band is used to this level of touring, Frank Sidoris of Slash And The Conspirators, Garrett Whitlock, of Tremonti, they can all play these gigs and “You’re To Blame” and “Don’t Back Down” rather neatly underline that.

Mammoth WVH made a massive statement here, and when Myles Kennedy says later in the evening that “you’ll be hearing a lot more from these guys” he seems to have nailed it.

With no fanfare, just one light shines. “This is my kingdom!” screams Lzzy Hale. There are a lot of Halestorm shirts here, and when she finishes that before “The Steeple” kicks in, with the words “you are my people!” she’s not wrong.

There are thousands that have braved the freezing cold in the West Midlands tonight, and in the space of 50 minutes Hale could basically get them to do whatever she wanted. Now, the usual cliches apply. Let’s be blunt, she’s both a wet dream for the teenage boys in here and an object of desire plus a role model for the girls (she’s cool with all three at a guess), but here’s something you can’t overlook: Halestorm are exceptional at what they do.

“Wicked Ways”, “Love Bites (And So Do I)” drip with sleaze, but it’s all bound up in a message of empowerment, “Bombshell” is dedicated to the “ladies in the house” and reminds them to be themselves. “Mine” is radio friendly rock that Def Leppard would be proud of, but when they play “Familiar Taste Of Poison” it is a vehicle for Hale’s sensational voice.

Arjay Hale plays a drum solo that is better than the norm, before the band roar back with “Back From The Dead” and “I Get Off”, which the frontwoman reckons is about her love of being onstage. Ok, we’ll go with it, the real lyrics make me blush….. We’re on safer ground with the extended “Miss The Misery, which is all the evidence you need to work out that the next time Halestorm play arenas in the UK, they are topping the bill.

Forgive the unusual jumping in spot here – but it’s got a point, I hope. Towards the end of their set, Alter Bridge play “Isolation”. And MV thinks to itself: good lord this is heavier live than I expected.

Ok, lets come clean then, shall we? Alter Bridge have been going for nearly two decades, and I’ve never been sure about them. I’d assumed they were a little soulless, a little corporate, playing it safe. Until now.

See, that one was the final confirmation that I needed. Alter Bridge are proof, yet again, that you have to be good to play arenas. You have to have songs that connect, that mean something to people, otherwise it doesn’t happen. Alter Bridge have them. And lots of them.

Most of them are massive great stadium shakers. “Silver Tongue”, from their new album (one of only two they play from it) begins the set, but its followed by “Addicted To Pain” – a tune so good that I liked it before setting foot in here tonight, and it’s got everything you need for an anthem. Massive choruses, thunderous riffs and not a single hair out of place.

There are many highlights – and make no mistake about it, these boys know how to pace a set – “Slip To The Void” broods before it utterly explodes and “Shed My Skin” is a ballad from the top draw, and when Mark Tremonti sings “Burn It Down” it brings with it some real Alice In Chains-isms.

Both extremes of the set follow. “Cry Of Achilles” rumbles and is gargantuan but the stripped down “In Loving Memory”, which singer Myles Kennedy explains was one of the first songs Tremonti had played for him when he’d joined the band, was written about Tremonti’s mother and it’s genuinely beautiful.

“Blackbird” – like “…Pain” one that MV had enjoyed even before the show, and the new albums title song (“we’ll attempt to play this, but it’s the hardest to play in the set” jokes Kennedy) as the set closer “Metalingus” plays there is a wave of euphoria in the arena.

They come back for an encore, of course, but a modest Kennedy reckons its his nightmare that no one stays so is thrilled that Birmingham has, and “Rise Today” is yet another from the draw marked as “stadium ready”. Indeed, as “Open Your Eyes” ends, I look around the venue and there’s people singing it, people hugging each other and people who clearly have loved these songs since 2004.

And you can see why. The whole package with the band is important, their charity work, their demeanour (Kennedy spots a fan with a banner saying its his 21st birthday, sings “Happy Birthday” to him and dedicates a song) is totally different to the brash, OTT stuff from most US bands of this stature.

That said, gigs are nothing without songs. And for an hour and 40 minutes tonight, Alter Bridge gave a masterclass in how to deliver arena rock.