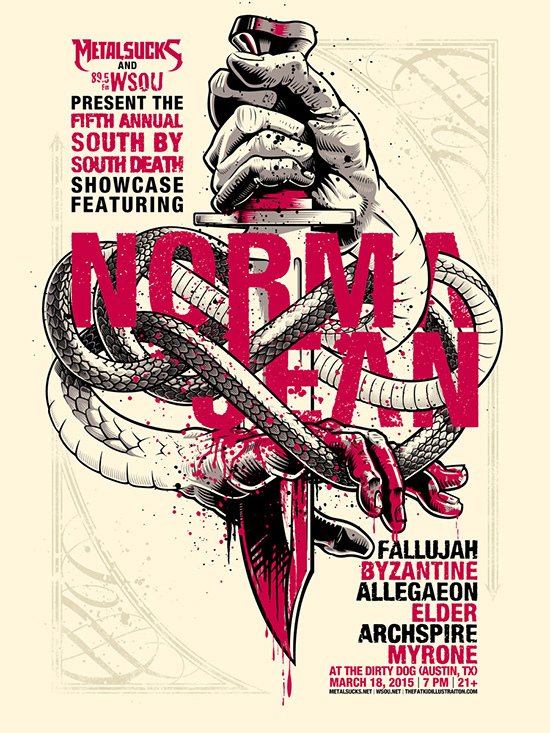 As previously announced, Colorado’s Allegaeon will be back on the road in March. Recently, they’ve added South by South Death do their confirmed list of shows. The fifth annual South by South Death showcase, presented by MetalSucks.net and 89.5FM WSOU, is scheduled for March 18th at the Dirty Dog in Austin, TX and featured headliners Norma Jean, with support from Byzantine, Allegaeon, Elder, Archspire, and Myrone, in that order. More details and the official announcement can be read at metalsucks.net HERE.

Additionally, Allegaeon will be appearing at the Texas Independence Fest and the New England Metal and Hardcore Festival schedule as part of their “Get Rekt” tour this Spring. The dates are part of Allegaeon‘s continuing campaign in support of “Elements of the Infinite,” which claimed spots on year end lists, including Loudwire.com, MetalSucks.net, and HeavyBlogisHeavy.com.

The combined view count for Allegaeon‘s three most recent music videos has eclipsed half a million! Watch the fan-favorite “1.618” plus “Our Cosmic Casket” and the more recent “Threshold of Perception” on the band’s official youtube playlist HERE.

Allegaeon‘s “Elements of the Infinite” album was released in June of 2014 worldwide on Metal Blade Records. For the first time ever, Allegaeon cracked the Billboard Charts and Canadian Charts. “Elements of the Infinite” came in at #25 on the Billboard Hard Music Chart, #31 on the Canadian Hard Rock Charts and #141 on the Canadian digital music charts. On the day of release in Canada, the album was #1 on iTunes Metal Chart, #6 on the iTunes Rock Chart and #38 on the iTunes Top 200 Current Album Chart. In the US, the album peaked at #3 on the iTunes Metal Chart. “Elements of the Infinite” can be ordered now on http://www.metalblade.com/allegaeon, where the band’s previous videos for “1.618,” “Our Cosmic Casket,” and “,” and “Dyson Sphere” are also streaming.

“Elements of the Infinite” was recorded, mixed and mastered by Dave Otero at Flatline Audio in Colorado Feb-April 2014. Otero’s work has been more prominent in the last few years – some fans may have heard his work on the latest Cattle Decapitation album, Cephalic Carnage, and more. Otero’s efforts here, along with the band’s new material, has led to Allegaeon‘s most realized and mature release to date. Musically, fans will be treated to orchestrations that provide significant depth to the sound. The orchestrations were composed by guitarist Greg Burgess along with Joe Ferris (monumentalaudio.net).