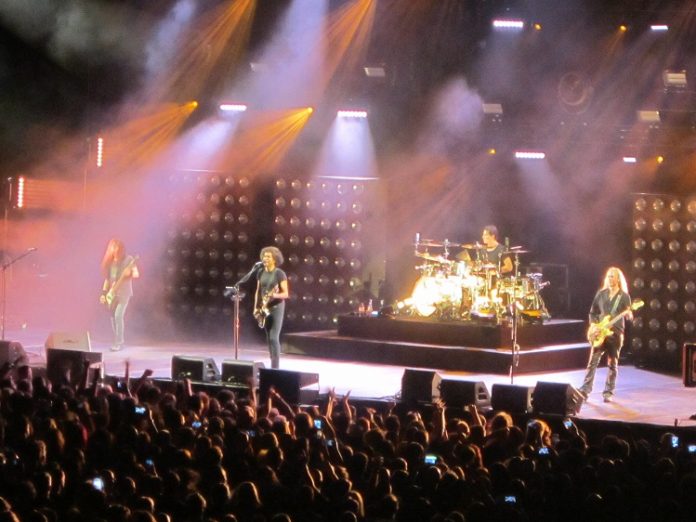 For a “big rock show” as it were, it is striking how understated Black Rebel Motorcycle Club are.  The three piece are an hypnotic draw, one that sucks you in, almost, before you’ve realised it and their 45 minutes here is a lesson on how to do it on their own terms. Bookending the show with a couple from their first album, “Red Eyes And Tears” sees them bathed in red light, meaning the music takes on a mystical quality almost, while “King Of Bones” is from the other end of the scale, showing their most recent “Wrong Creatures” record glimpsed for the only time.  “Beat The Devil’s Tattoo” is a real highlight too, and mines some deep, primal blues stuff. “Warning” injects some real, pulsing urgency – as well as showing the vocal interplay between Peter Haynes and Robert Levon Been, while “666 Conducer” has a genuinely catchy chorus to go with it. And as “Spread Your Love” – what else – ends things you are left with the same thought you had back in 2001 when hearing it: “man, that’s a brilliant song, the band that makes that can do anything they like.” BMRC have too, and that was your proof. 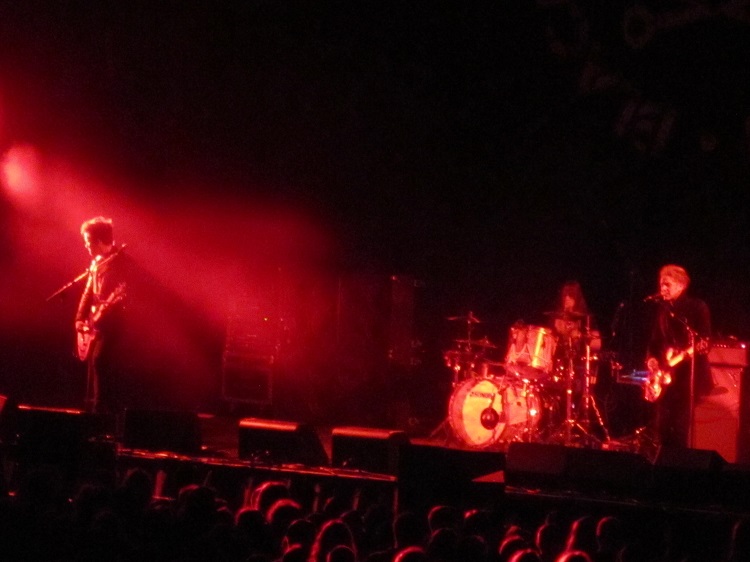 “I’m the dog who gets beat. Shove my nose in shit”. Anthems aren’t supposed to be like that. They really aren’t, and yet, when the gig ends and Jerry Cantrell – the bands leader through the bad times and the good – says: “thank you for inviting us to your party” you can’t argue.

But if the opening act have always been on the maverick side, then – and this is why this bill works so well despite eyebrows being raised in some quarters – Alice In Chains are a one off.

I never understood what “grunge” meant, but here’s what I know. Of all the bands that get called that word, this is the best. Hands down.

No band has ever really sounded like them. Many try. No one has the downtuned guitar lines, thick as molasses, the rhythm section – and Mike Inez and Sean Kimmey are the best at what they do in fairness – and the vocal style they have.

The vocal style, I guess, is the interesting one. Because after the tragic death of Layne Stayley, how can you follow it?  How do you carry on? Well, for 13 years now William DuVall has taken things forward, in his own way but manages to stay true to the legacy. It’s a wonderful feat, in fairness. And when things start with “Bleed The Freak” – putting the debut album to the forefront, what you are seeing is a classic band who know they have a selection of wonderful songs in their back pockets.

“Check My Brain” – and I can well remember the feeling 10 years ago when they released it as the “comeback song” if you like of “yes, my boys are back!” – has more than stood the test, but then last years “Rainer Fog” (and the title track and “Never Fade” in particular are impressive) proved they retained the knack.

AIC cleverly intersperse the old and the new throughout. “Dam That River” and “Them Bones” are greeted like old friends and Cantrell adds vocals to “You’re Decision” and “Down In A Hole” has the kind of beguiling harmonies that they’ve made look effortless.

But this is an arena rock show. And like the bit when Def Leppard do “Pour Some Sugar On Me”, “Rock Of Ages” and “Photograph” then this has got its crescendo too. “We Die Young” – the one in 1990 or something that we saw on Raw Power and rushed to school to go “did you see…..?” “Angry Chair”, and the aforementioned “Man In A Box.” It doesn’t get much better.

The encore has a good go, to be fair. Sticking to the new “The One You Know”, and the old “Would?” and the de facto anthem “Rooster”.

“Rooster’s” first line. “Ain’t found a way to kill me yet” resonates, because not only are AIC alive and kicking, they are bigger – and if not better, then just as good perhaps? – as ever.